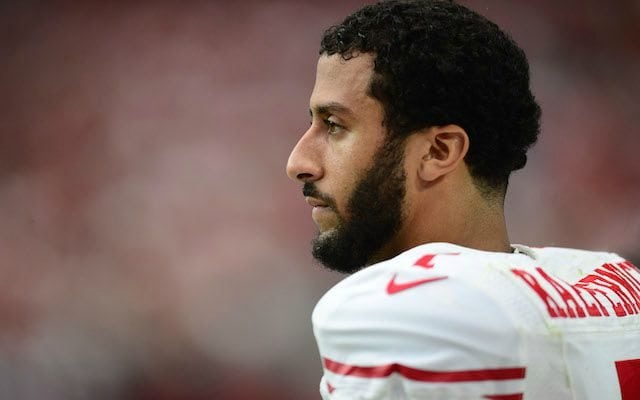 Two years ago, then San Francisco 49ers quarterback Colin Kaepernick refused to stand for the National Anthem, in protest of the violence against people of color by the police.

And lots of Americans lost their collective minds, unleashing all manner of vitriol and damnation, claiming him a traitor, calling for his firing, and wishing injury and death upon him.

Most striking has been the assertion that Kaepernick’s expression is somehow “Anti-American”.

I’m not sure these folks understand what America is, because it’s exactly that; the freedom to be and feel and do and protest those things one feels burdened to. Whatever the song actually points to and stands for, it’s a heck of a lot more important than you being concerned about someone else’s posture during the singing of the song itself.

America as an ideal isn’t about marching in lock step when you see horrible stuff happening.

It isn’t about shutting up in the face of injustice.

It isn’t about playing nice to appease those uncomfortable with your position.

It’s not about towing some subjective party line that supposedly illustrates your national pride.

It’s not about ignoring people dying, but getting worked up over a football pre game ceremony.

It’s not about some two-minute decorative moment of showy, costless patriotism.

America as an ideal, (the one from the Anthem) is about speaking boldly and demanding justice and giving voice to the voiceless, because that’s the way you respect the freedom. That is how you show gratitude for the gift. That is how you honor those who died to give you that freedom.

I’ve seen people make some ridiculous comparison of fallen soldiers with Kaepernick, as if they’re at all the same. One chose to serve in their country’s military, and the other chose to speak into perceived injustice in the country that solider fought to defend. One is a solider sacrificing for America, the other an athlete making a statement about black lives mattering in America.

This isn’t a “hero contest”. These aren’t opposing ideas. They’re lyrics to the same song.

Kaepernick is a person of color. I’ll let you determine what that has to do with the level of outrage here by white Americans (and this white, American President). All I’ll say is that the folks calling for Kaepernick’s head are like the same ones who gave Olympian Ryan Lochte a little pat on the head and a chuckling “Boys will be boys”, when he broke into and vandalized a Brazil gas station bathroom, and filed a fake robbery report before lying to the worldwide media and fleeing the country.

The double standard is notable and disturbing, and all the more reason the quarterback was right to make the statement he felt compelled to make, because of what the response to it reveals about us.

The sick feeling I get in the pit of my stomach seeing this anger, is that to some people black lives don’t matter—but their red, white, and blue songs do.

Don’t miss the heart of this: This isn’t about whether or not you like Kaepernick’s gesture or timing or methods. It’s about whether or not it’s American. It absolutely is. You’re perfectly free to not like it. That isn’t the question. It is freedom in its purest form.

Colin Kaepernick protesting during the anthem isn’t anti-American; it’s affirming the very freedom America represents and giving us a real-time example of how you leverage your influence to change things for the better. In an age where pro athletes are seen as petulant, aloof, selfish babies, he chose to use his visibility and his platform to actually give a damn and to speak into something far more important than games. Crucifying him for this is missing the point of this country spectacularly. It’s also an alarm going off that your privilege might be showing.

They really want him to behave himself and play along and say nothing and dance for them.

I’m glad he chose to speak his heart and his conscience, and to sit down when they told him to stand.

In the ways and times and manners we feel called to do the same, it’s what the Land of the Free and the Home of the Brave means.

That’s a gesture worth singing about.

(This piece was originally published in August of 2016. As of today, Kaepernick still does not have a job with an NFL team, while the President of the United States recently advocated for police brutality. Patriotism isn’t really the issue here, nor is  respecting the flag, the Constitution, or America.)