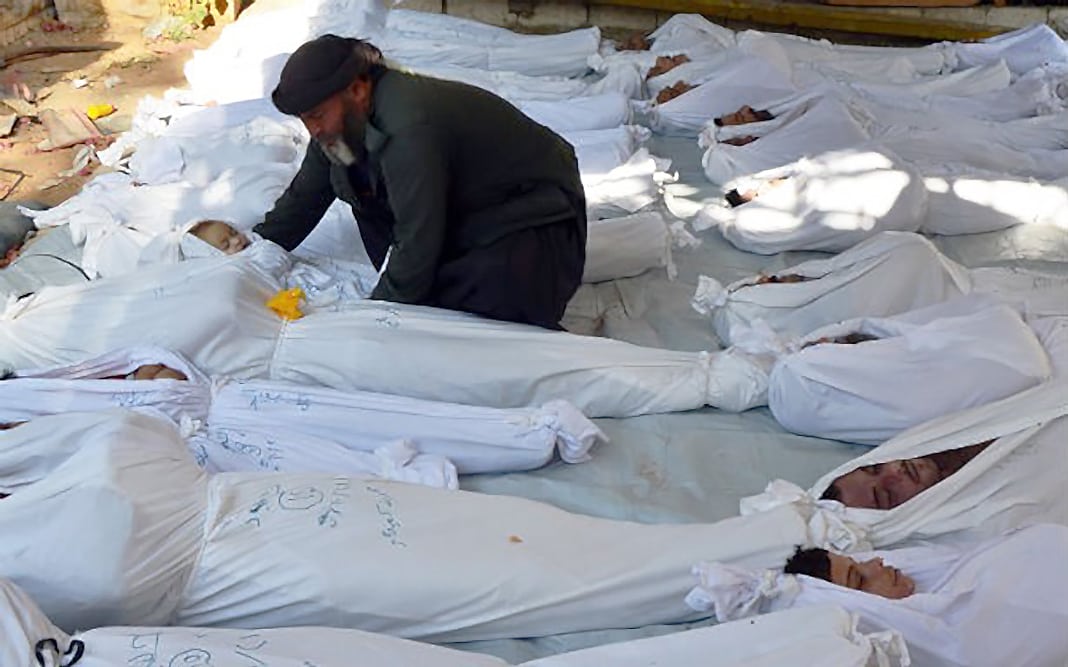 Photo originally from TheWire as printed by the Atlantic.

Why are you crying, Trump supporter?

I mean, I know why I’m crying, but I’m just a bit confused. You seem genuinely shocked by the brutality in Syria, truly surprised by the unthinkable horror of it all. You shouldn’t be. You should have seen it coming.

This is merely a few God-awful miles down the track of the “Trump Train.”
It is the cancerous growth of Make America Great Again,
of Muslim Travel Bans,
of “bomb the sh*t out of them” tough guy talk,
of religious stereotypes created to rally your base,
of building walls and closing borders,
of “get out of my country,”
of perpetuating the fear of brown people.

This is the human collateral damage of what Donald Trump’s been selling for 16 months now. It is the cost in actual vibrant, beautiful lives, of the kind of incendiary rhetoric and alternative facts and FoxNews truths that you’ve been fine with up until now. This is what you bought and paid for. Maybe not something this sadistic or explicitly grotesque, but the heart is the same: contempt for life that looks different and a desire to rid yourself of it.

I want to believe that you’re truly outraged, but honestly your resume is less than convincing.

You didn’t seem all that broken up when Muslim families were handcuffed in airports a couple of months ago, or when mosques were being defaced, or when many of us were pleading the case for people fleeing exactly the kind of monstrous atrocities you were apparently so moved by now—and getting told to eat our bleeding hearts out by MAGA hat-wearing trolls. You weren’t all that concerned when your President told terrified, exhausted refugees to leave and go home—twice.

Your tears may as well be candy bars to these dead children. They’re that useful to them now and they’re that helpful to any of us who’ve been fighting for months to have good people in Syria and Iran and Turkey and here in America to be treated like human beings; whether they’re Muslim or gay or Transgender or poor or sick.

Be outraged at a President who plays patty-cake with malevolent dictators,
who says whatever hateful nonsense comes into his head,
who daily murders the truth to justify his misdeeds.
Be outraged at partisan media that insists on manufacturing Muslin monsters for the good Christian folks here to fear and feel righteous in turning away.
Be outraged at the bullies wielding their pulpits and their majority votes like sledgehammers against people of color both here and abroad.
Be outraged at your own laziness and apathy when it comes to looking for the truth and ferreting out what is real and what isn’t.
Be outraged that Donald Trump is lamenting the “poor dead babies,” he once said he would look in the face and tell to go home.
Be outraged that America is becoming as intolerant of diversity as any country on the planet.

Maybe this is a turning point for you. Maybe it is a revelation. Maybe seeing video of quivering, dying toddlers is what it will take to finally make you see that this is what hatred does. Every. Single. Time. This is the only inevitable outcome of people like Donald Trump and his cadre of fear-peddlers, pretending to save the world from the monsters they’ve created just to slay. A unilateral, hastily planned, ill-conceived, and transparently political military strike won’t cover this truth: we’re acting in supposed defense of children we refused sanctuary on our shores, after they were subjected to unspeakable violation in the place we sent them back to.

The violence in Syria is heartbreaking and inhumane and clearly a blatant act of aggression against humanity—but it doesn’t happen in a vacuum and it isn’t an isolated event. It is cultivated in a million smaller, quieter, less visible ways, and its impact is equally brutal, whether it happens thousands of miles away with chemical weapons or whether it’s wrapped in red, white, and blue and called a Travel Ban. It’s all the same horrible, vicious poison that destroys people by making them into a threat.

I’m not interested in your tears unless those tears move you to pushback forcefully against the violence happening in Syria and in Chicago, against terrorists and dictators and religious extremists wherever they do what they do and whatever faith tradition they claim. Yes Assad and Putin are the worst kind of horrible inhumanity and they should be condemned and opposed, but let’s stop pretending we don’t see the similarities here at home—if not in severity, then in spirit.

Be equally outraged at all the horrors human beings inflict upon each other, and then we’ll be grieving over the same tragedy and fighting the same fight.