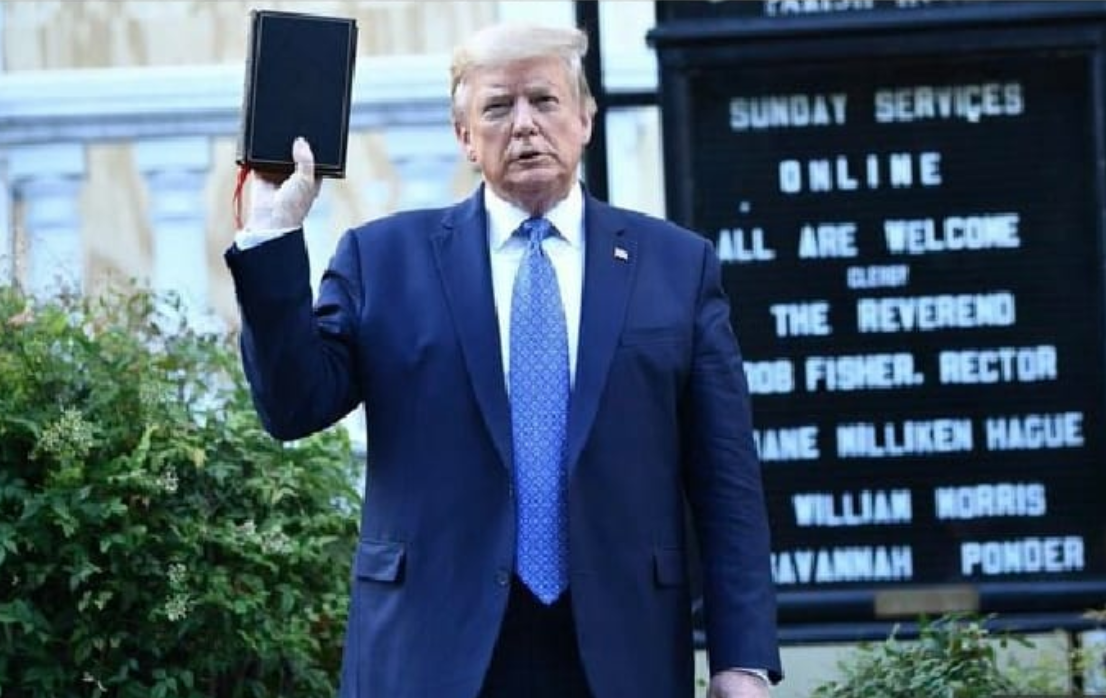 “And when you pray, do not be like the hypocrites, for they love to pray standing in the synagogues and on the street corners to be seen by others. Truly I tell you, they have received their reward in full. But when you pray, go into your room, close the door and pray to your Father, who is unseen. Then your Father, who sees what is done in secret, will reward you.” — Jesus (Matthew 6:5-6)

We need to be really clear on something, because there seems to be confusion out there lately:

They may use the word and steal the iconography and cop the aesthetic, but that is where the resemblance diverges and where the similarities end. There remain no other commonalities with which to rightly associate the two.

It is spiritual misappropriation: the violent hijacking of something helpful and weaponizing it in order to do the greatest amount of damage in the shortest amount of time. It is a hostile takeover of something beautiful and grossly disfiguring it to terrorize people with.

This isn’t Christianity—at least not what Jesus intended it to be.

Jesus intended Christianity to be:

And there is nothing of mercy or humility or purity or peacemaking in this thing claiming to be Christianity.

No, this thing is the antithesis of all of it.

This isn’t Christianity—at least, not if we’re going to listen to Jesus.

Where Jesus implored Christians to love and to care for and to show hospitality to their neighbors—this drives people to fear them and have contempt for them and send them back and wall them off.

Where Jesus directed Christians to pray and to give in quiet and secret—this is a shameless, staged photo op to engender applause.

Where Jesus told Christians that they would be defined by the way in which they lavishly love humanity—this is a malicious assault on nearly all of it.

Where Jesus directed Christians to live humbly and take the lowest place—this is arrogance and boasting and self-promotion.

Where Jesus fed multitudes and healed sick without asking for repayment—this is healthcare repeals and canceled school lunch programs and “pull yourself up by your own bootstraps disdain for the needy.

Where Jesus’ followers shared all things and lived interdependently and made sure that no one went without—this is cries of “Socialism” whenever those with abundance are asked to share with those who lack.

Where Jesus threw open the doors of the kingdom so that the entire world could find welcome and refuge and comfort—this is a guarded, gated community of privileged, close-fisted white Americans.

No, this isn’t Christianity—and more people who know what Christianity was intended to be, need to say so right now.

We need to call this what it is: a bait and switch of the vilest kind.

It’s just not what Jesus says it is.

No, he told us what this is:

“Watch out for false prophets. They come to you in sheep’s clothing, but inwardly they are ferocious wolves. By their fruit you will recognize them. Do people pick grapes from thornbushes, or figs from thistles?  Likewise, every good tree bears good fruit, but a bad tree bears bad fruit.  A good tree cannot bear bad fruit, and a bad tree cannot bear good fruit. Every tree that does not bear good fruit is cut down and thrown into the fire.Thus, by their fruit you will recognize them.” —Jesus  (Matthew 7:15-20)

This thing is not Christianity.

This is Rome.
This is Empire.
This is corrupt and predatory power.
This is perverted religion wielded like a hammer.
This is hypocritical, showy piety paraded for everyone to see.
This is the darkness Jesus claimed we should be brilliant light streaking into.
This is the bloated ugliness he said we were to live in quiet, gentle opposition to.
This is the table of greed he invited us to angrily turn over.

The Christianity of Jesus left people with more dignity and greater care; with healed wounds and fuller bellies, with calmed fears and quieted worries. It left people seen and heard and known. It left a wake of kindness and generosity and goodness and compassion.

No, this isn’t Christianity.

To hell with what this is.