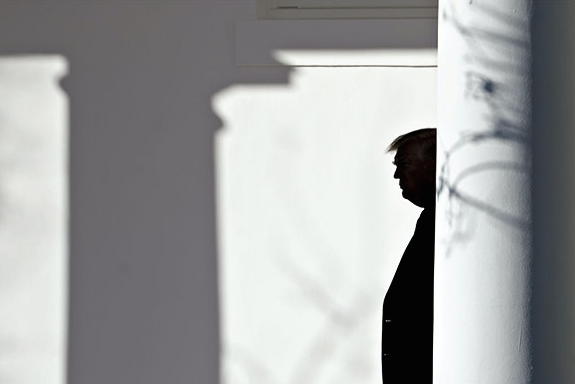 During a Q & A at a recent tour stop in California, an elderly man was handed the microphone, and after pausing for a moment to gather himself he asked quietly:

“John… what happens if he wins again?”

There were audible groans from the crowd, followed by a long and heavy silence.

If he wins, we’re going to do everything we’re doing today: we’re going to speak clearly and advocate for vulnerable people and loudly demand truth, and we’re going to leverage our lives and our platforms and our influence for equality, justice, and decency—because if he wins again, these things will be far more threatened than they are right now.

If he wins again, good people committed to our shared humanity will be more necessary than ever—and we’re going to need to be present.”

That’s what I said that night.

I was thinking something else as I said it:

That isn’t an option.

It simply cannot be allowed.

If he wins again, November 2016 will seem relatively uneventful; a partly cloudy day in advance of a Category 5 hurricane.

If he wins again, the historic legislative overreach we’ve been seeing will seem tame and tolerable.

If he wins again, children placed in cages and ICE arrests in hospital rooms will be benign and humane by comparison.

If he wins again, bigots will be more emboldened and racists more empowered; their escalating violence commonplace.

If he wins again, more cockroaches will stream from the shadows and into the light of day with more disfigured hatred than we can imagine, because they will feel a kindred spirit with totally unchecked power.

If he wins again, We The People will be left without the protection of impartial judges or the luxury of unpolluted waters or the security of untainted agencies.

If he wins again, Christianity will be exponentially weaponized to control women and to ratify prejudice against LGBTQ people and to perpetuate white supremacy and to legislate theology.

If he wins again, we can forget about fair elections or freedom from direct foreign influence in our Government, or about any of the protections and liberties promised by our Constitution. These will be permanent relics of the distant past.

If he wins again, it will be the greatest defeat for goodness and truth, a day of mourning over the nation we will have lost forever.

And so we cannot allow him to win again.

The justice-seeking and diversity-welcoming and environment-cherishing and humanity-loving people here need to work as if our lives and our futures depended on it.

If we don’t want him to win again, we need to find our commonalities, cease our internal squabbling, and discard our cancel culture purity politics.

If we don’t want him to win again, we have to actively engage the political process with our resources and our time and our social media profiles—and most of all with our votes: not abstaining or protesting or using them as strident middle fingers to other candidates—but speaking in one singular voice that cannot be avoided or gerrymandered or fixed silent.

If we don’t want him to win again, people who are rightly and fully horrified by what we have seen in the past three years, have to understand the urgency of the next 12 months enough to sacrifice something we haven’t yet: time or a voice or sleep or binge watching sessions or money or social standing or relationships with people who are silently or vocally supporting him.

If we don’t want him to win again, it is going to cost us something—and we all need to dig deep into the necessary reservoirs of our lives.

I don’t want him to win again—and he hasn’t won again yet.

This means that the possibility of him not winning again in still within reach, but it will not be given to us.

It has to be taken by force: the force of our numbers and our raised voices and our non-violent but not-passive presence in the places we have refrained from going.

Him not winning again isn’t a mystery and it doesn’t take anything more than what we have in our collective hands.

Yes, if he wins again, we’re are going to do everything we’re doing today.
We are going to speak clearly and advocate for vulnerable people and loudly demand truth, and we are going to leverage our lives and our platforms and our influence for equality, justice, and decency.

But if he wins again, we will be able to do far less of these things and will be in greater danger as we do them and we will be in much greater peril than we imagine possible right now.

Him winning again is a waiting nightmare that we are guaranteed if we fall asleep right now.

This has nothing to do with a political victory.

If he wins again, humanity loses.

And so we need to make sure that he doesn’t win.

What are you going to do?