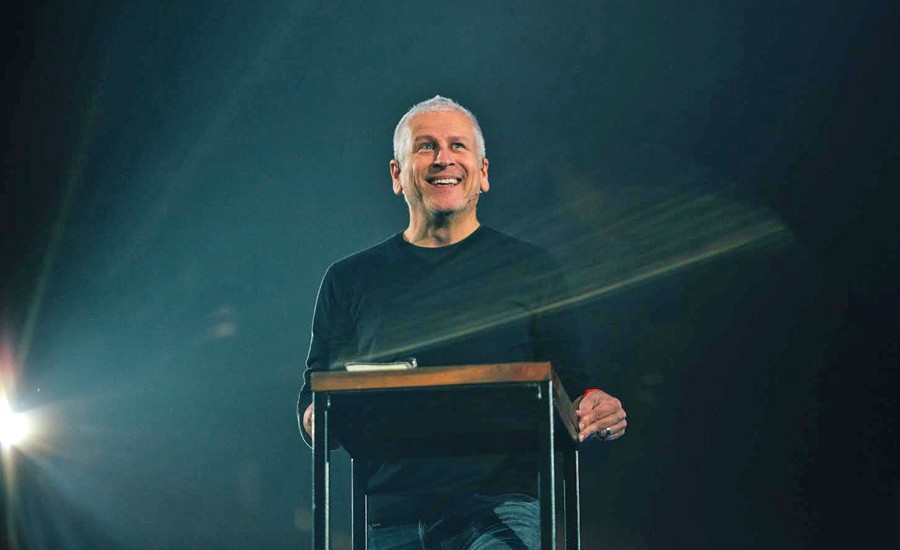 “We understand the curse that was slavery … but we miss the blessing of slavery that it actually built up the framework for the world that white people live in.”

Yes, that is a correct quote.

He actually said this.

You can watch the video here:

As Giglio tossed around an awkward, nonsensical Christian-speak word salad, inexplicably trying to connect Jesus’ crucifixion with America’s legacy of white supremacy and the savage blight of slavery, Cathy and Lecrae nodded and audibly validated—as if what Giglio was saying wasn’t an abject disaster and as if it was in any way coherent in its careless bastardization of Jesus’s life and death.

Giglio said he prefers the term “white blessing” to “white privilege.” How positively Caucasian Evangelical of him.

It’s difficult to overstate both how wrong and offensive Giglio’s statements are from a Biblical perspective and from a simple human decency perspective—and how much of an indictment of the white Evangelical Church in America a moment like this is.

Louie Giglio is dangerous in a way that is subtle but important. This is not your mother’s televangelist. He is not old guard Evangelical. He’s not from the stuffy, dusty, buttoned-up pipe organ cathedrals of Frank Graham and Jerry Falwell. He doesn’t bulldoze with damnation or pound a pulpit of brimstone warnings. He paints beautiful word pictures of the vastness of a loving God (who is decidedly male). He is engaging, passionate, and he has mastered the pastoral art of appearing spontaneous, while delivering surgically-precise language surrounded by swelling music and glowing lights, all crescendoing into an emotionally-manipulative moment that feels decidedly spiritual. (The modern megachurch blueprint is found here.)

Giglio’s Passion conferences, summer beach youth camps, and Passion City Church have largely birthed the modern, sleek, stadium rock show megachurch movement that has become ubiquitous across the country. His ministry is primarily to high school and college students, which means that he and men like him are shaping the next generation of American evangelicals; millions of teenagers who are lured in by the towering LED screens, slick branding, and stirring, anthemic choruses—unaware that this is a gateway drug to something far more toxic and addictive.

Giglio’s ministries are emblematic of the new Evangelical church communities dotting our revitalized city downtowns and booming suburbs; carefully curated, multimedia experiences that bombard attendees with vague, intoxicating talk about Love and Welcome, and are adorned with all the trappings of comfortable diversity—but when you get to the fine print of what they believe, who they hire, the politicians they align with, and the causes they support—you’ll find that it is the same decrepit, decidedly white Religious Right, with the botox facade of Twenty One Pilots choruses and selective social justice good vibes.

Giglio’s comments on slavery and whiteness reveal a more nuanced kind of Prosperity Gospel; one offering favor (not for financial contribution, as the older guard pitched), but through American whiteness (though it would never be framed as explicitly). Much like its sister organization the GOP, the new Religious Right is a movement where power and privilege are seen as evidence of God’s approval.

Combine Giglio’s influence with Lecrae’s massive fanbase and Cathy’s huge national teenage restaurant staff, and represented in a conversation like this one are millions of soon-to-be American voters, who are being indoctrinated into a religion of supremacy and misogyny in ways far more subtle than MAGA hats and racist diatribes—but that perpetuate the same gender disparities and racial inequities, all in a package so emotionally stimulating and that almost feels righteous.

Giglio isn’t stupid and he is self-aware. He will likely walk back these comments and apologize, do even greater theological gymnastics to connect the dots from a Middle Eastern Jesus to white American colonialism, or reframe the criticisms he’s getting as religious persecution to fuel his flock.

We can’t be stupid either. We need to pay attention to pastors and churches and influencers like Giglio, who benefit financially from a system they are beholden to and are perpetuating. It is precisely because he and church leaders like him are usually more subtle, that we need to scrutinize them more carefully; to look at their partners and patrons and the bedrock beliefs that lie beneath the surface decorations.

Coming at an extremely vital time here in America, when racial wounds are reopened and fresh, Giglio’s seemingly off-the-cuff comments, more than being incredibly insensitive and theologically ridiculous, were a window into a much wider and deeper problem America has: white conservative evangelicals haven’t changed as much in their supremacy, homophobia, or misogyny, as in their delivery.