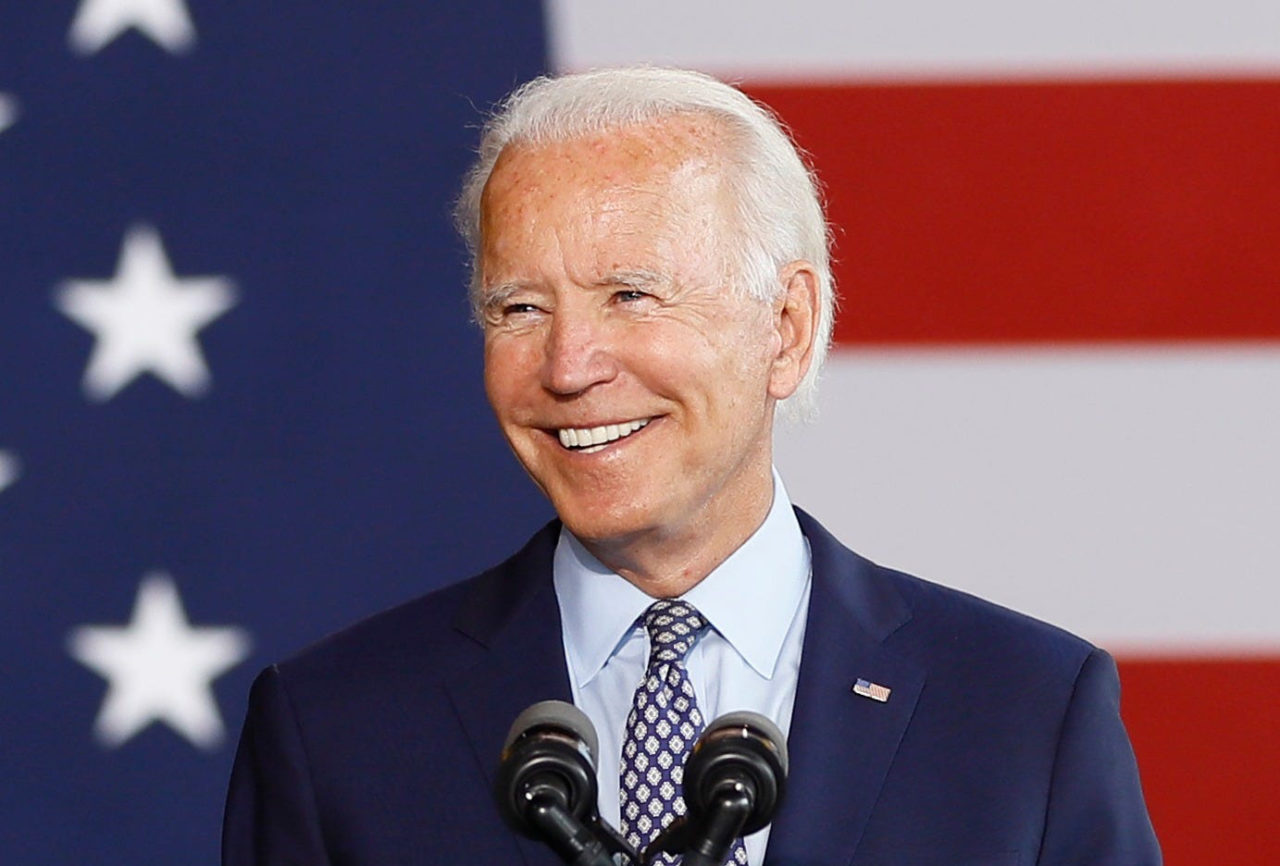 The lesser of two evils.

I hear people using this phrase again right now and I hate it.

I heard it four years ago and it was a lie then, too.

The truth is, the lesser of two evils didn’t win in 2016, the singular evil did. His body of work, as they say, is what it is. Debating that at this point is ridiculous. The only people still defending him are brainwashed Evangelicals, looney conspiracy theorists, and abject racists. The raking light of history is recording all of it, whether these people like it or not. The human rights violations and the assaults on our Constitution and the attacks on our institutions and the rampant criminality cannot be denied or explained away or buried in fake Fox News headlines.

Joe Biden is not the lesser of two evils, because he is not evil by any measure.

He is a profoundly decent man: a man of faith, a man of compassion; a man who is willing to listen to different viewpoints, capable of evolving, and able to admit his mistakes. He is a man who loves deeply, mourns greatly, and gives fully. He is a man with actual meaningful, healthy relationships with other human beings. He is a humble man who sees others as more important than himself.

In other words, he is everything his opponent is not.

He is also, not perfect.

I’m okay with that.

It’s one thing to be a good-hearted but flawed human being who sometimes says something stupid or occasionally has an error in judgment or simply gets it wrong. Most of us fall under that category. We’re not any kind of evil, we’re just imperfect , emotional people, and so we fail and fall—sometimes slightly and sometimes spectacularly. That’s who Joe Biden is. He is one of us. He is human. We need more human these days.

It’s something else entirely to be an inherently malevolent creature: to be incapable of empathy, defiantly unwilling to admit mistakes; to wake up every day intending to do harm and feeling no remorse for it. If the word evil can apply to anyone, it’s the current President. He lacks a single noble impulse. Even his supporters know that.

I would much rather be led by a well-intentioned human who sometimes misses the mark, than a purposefully cruel sociopath who has no concern for other people’s pain. False equivalencies are irresponsible here. These are fundamentally different people in every important way one can measure such things.

You have to simply look at their Twitter feeds at any given moment and the differences between them becomes obvious. I’ve done this a few times over the last couple of weeks, and the results speak for themselves.

Take a look at these real-time comparisons and tell me what you see stored up in these two men’s hearts: 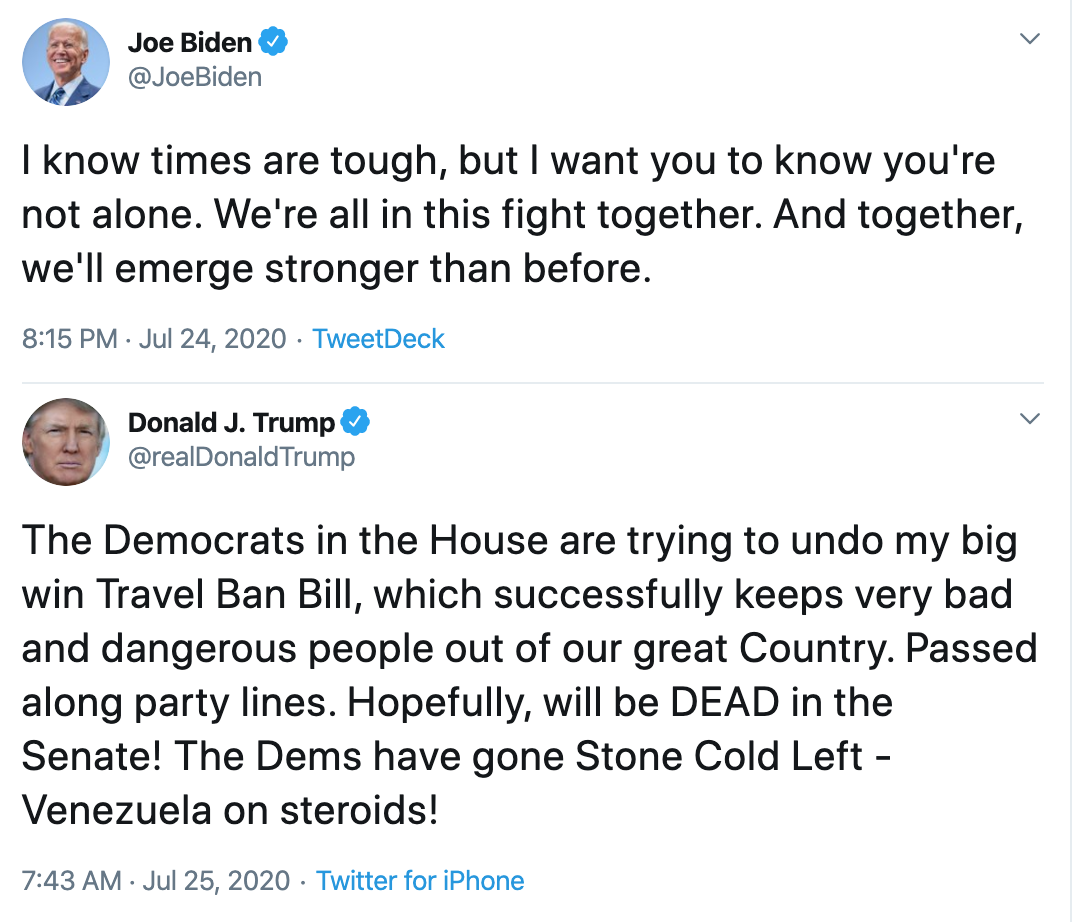 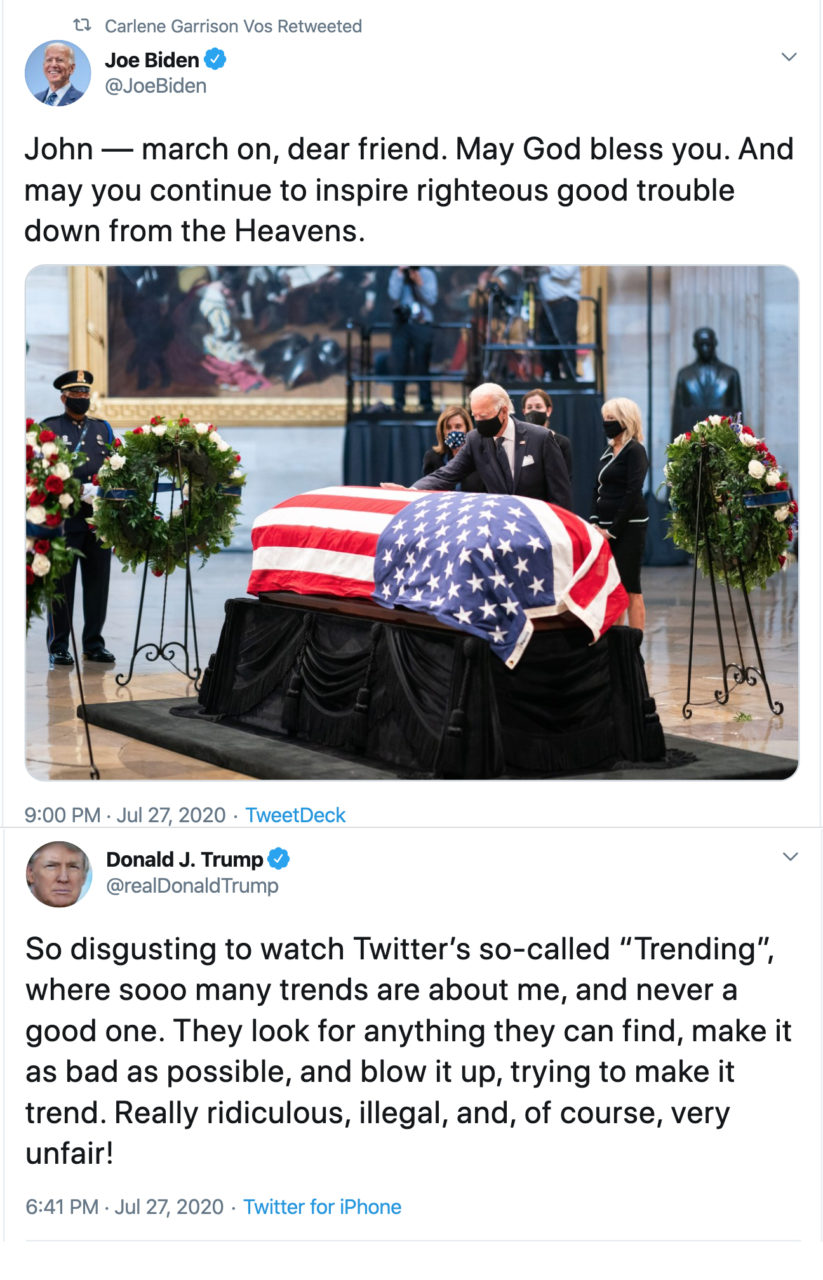 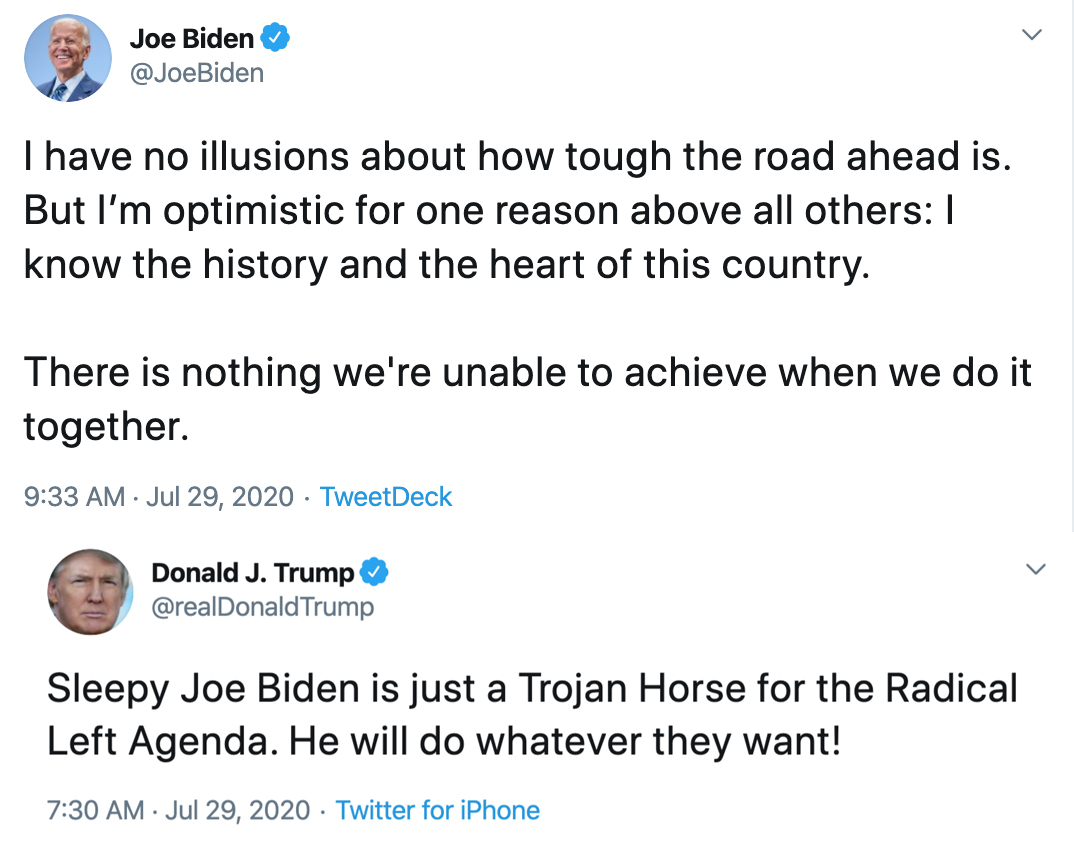 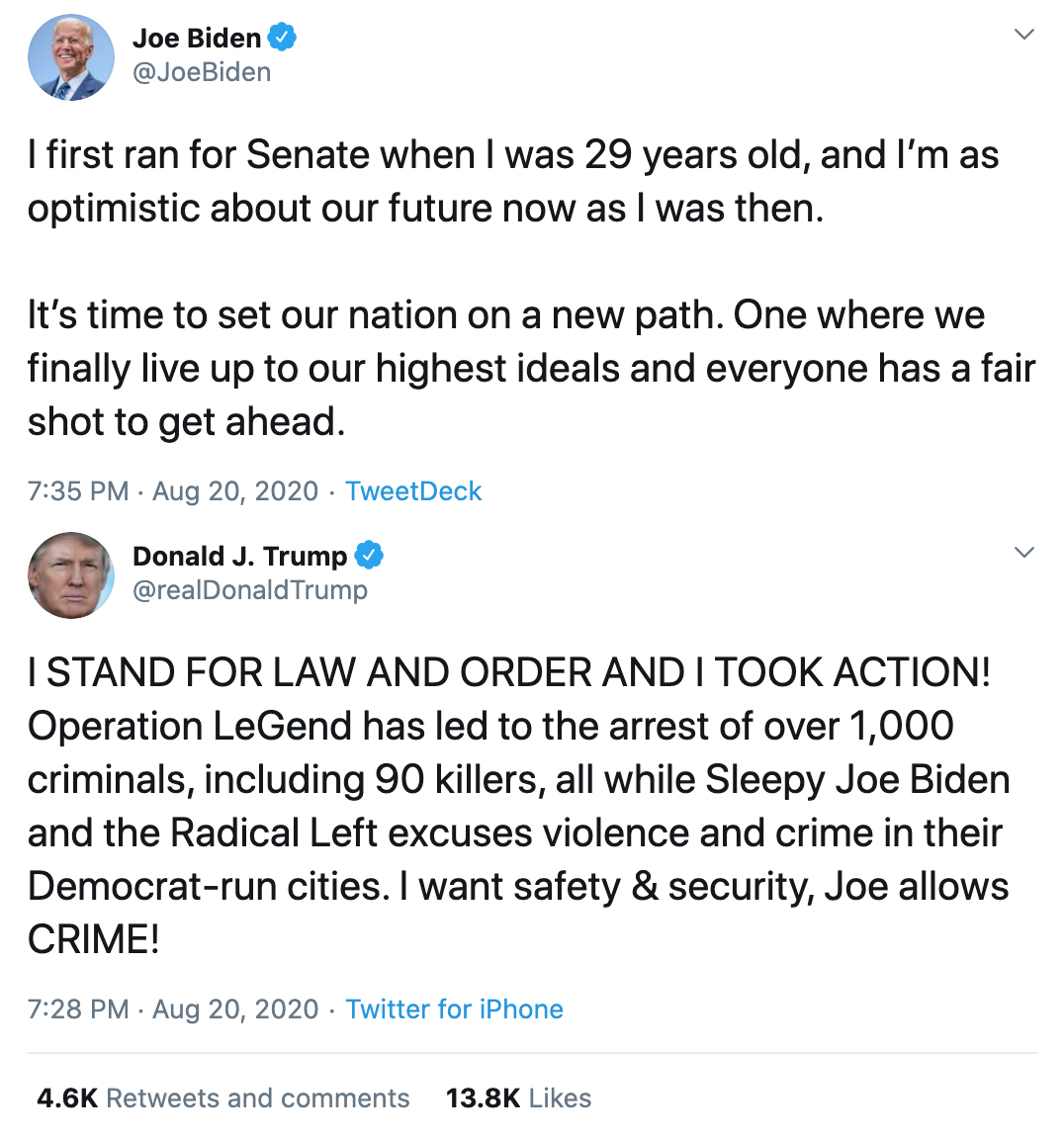 I’ll tell you what I see:

One man pulls us toward unity, the other stokes division.
One man speaks to our collective better angels, the other to the worst of who we are.
One man is burdened to inspire, the other compelled to engender fear.
One man is continually turned outward and the other is fully self-absorbed.
One man expresses his love for America, the other vilifies over half of it.

I’m not voting for Joe Biden begrudgingly.
I’m not holding my nose or halfheartedly standing behind his campaign, and I’m not supporting him simply because he’s opposing Donald Trump.
I’m voting for Joe Biden because I know that he won’t deny the existence of a pandemic.
He won’t blame viruses on Republicans.
He won’t silence medical experts.
He won’t reject Science.
He won’t allow tens of thousands of Americans to die in order to protect his ego.
He won’t tweet demeaning nicknames for his opponents.
He won’t validate nonsensical conspiracies.
He won’t shout over female reporters.
He won’t shut down social media apps when teenagers hurt his feelings.
He won’t dismantle the Postal Service in order to deny Americans their essential liberties.
He won’t make fun of people with disabilities.
He won’t call racists fine people.
And on and on and on.

Saying these two candidates are remotely the same, that they are both similar shades of evil is an excuse people to use to opt out or vote Third Party or to write in someone who is incapable of winning. The truth is, there are vast and profound differences in the two candidates and in the words they say and the work they’ve done, and it is patently irresponsible to declare yourself a conscientious objector in the battle for the soul of America—especially after what we’ve seen over the past four years. Nothing can reach that level of enmity. Nothing.

I respect people who give a damn about other human beings and I despise cruelty and that’s why the choice here is easy.

Saying Joe Biden is the lesser of two evils is an insult to his family, to his wife, to the people he’s helped, to the work he’s done, to the contributions he’s made, to the human being he’s spent a lifetime becoming.

Joe Biden is not the lesser of two evils.
He is the far better human.
He and Kamala Harris are not at all like their counterparts.
It’s time we all made a choice because our safety and security and collective well-being are in the balance and we owe it to this nation to participate.

I’ll go with goodness and sleep well at night.

Get John’s latest book ‘Stuff That Needs To Be Said’ here!