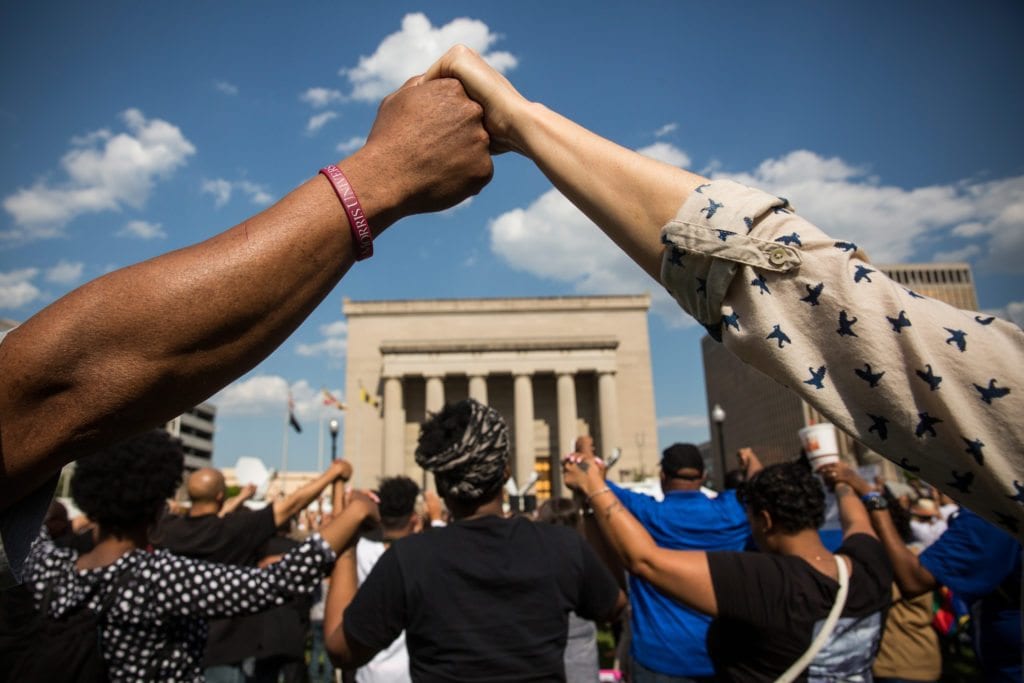 If Alton Sterling and Philando Castile were white they would still be alive today.

White people need to admit this.

We need to stop rationalizing the killing of young black men at the hands of police.

They are being murdered because of the color of their skin—and it’s disgusting.

We can say this without condemning all law enforcement officers. Of course we do.

We can even say this without condemning most law enforcement officers. We absolutely do.

But we should condemn these ones and the ones who disregard the humanity of people of color—and you better believe we do.

We have to look this all too familiar ugliness in the face, white America.

We have to call it out when it parades itself in front of us every week in crystal clear video.

We can’t rationalize theses deaths away or make excuses or act as if our eyes aren’t really seeing what they are seeing as they are shot repeatedly.

Most white people know what we see, we just need the stones to say it:

Systemic racism is still alive and well in America and it is still killing young black men.

We can’t be okay with this.

We can’t contend that the rules are the same for people of color.

We can’t pretend that the justice system is an equal opportunity entity.

We can’t act as though staying alive is simply a matter of “staying out of trouble”.

To paraphrase Pastor Eugene Cho, we can’t allow people to be killed, and then assassinate their character to make it okay.

For as far as we’ve come we are not at all where we need to be, not while black parents have to teach their children to fear the police, not while people of color are incarcerated at exponentially higher rates than whites, and not while men like Alton Sterling, Michael Brown, Freddie Gray, and Tamir Rice (a 12-year old child) continue to be snuffed out at the hands of people who are specifically taught to de-escalate tense situations, who are supposed to model restraint, men and women who are charged with protecting and serving all life equally.

As a white man I realize that I’ll never escape some inherent racism. It’s built into my operating system. My whiteness and nearly five decades in the cushy shoes of privilege will continue to create blind spots for me that are almost impossible to discern without a great deal of self-awareness, a lot of help, and a teachable spirit. And even then, despite every way that I try to stay aware of it, I will still unknowingly participate in both personal and systematic discrimination.

But I refuse to participate in this.

I refuse to be a white apologist for the mortal sins of other white people.

The only color my allegiance is to, is the identical red that runs through the veins of all of humanity.

I’m calling racism what it is, and not something that is less offensive to those who don’t believe black lives matter enough to say that they matter.

I am not going to let my brothers and sisters of color grieve or fight or live or die alone by staying silent.

This silence it is consent.

This silence is blessing.

This silence is participation.

Of course we don’t need to indict all members of law enforcement who do some of the most difficult work on the planet, but if we can’t call out even these most egregious displays of disregard for human life, we have no chance to admitting and copping to and addressing the subtle, more insidious discrimination in our systems and our hearts.

We need to be in the trenches and in the streets and in the political process alongside people of color to demand equality.

We need to be as loud as the most hateful of our own friends and families and coworkers.

If not, we’re the problem.

My faith compels me to demand that all people be treated as though they are made in the image of God.

My homeland declares that all men and women are created equal in the eyes of the law.

I will no longer deny my faith or my country by accepting the unmerited death of Alton Sterling or any other man of color.

I don’t know how to change things, but I know that saying and doing nothing will ensure that we’ll soon be eulogizing another black man.

And I won’t have that on my hands.