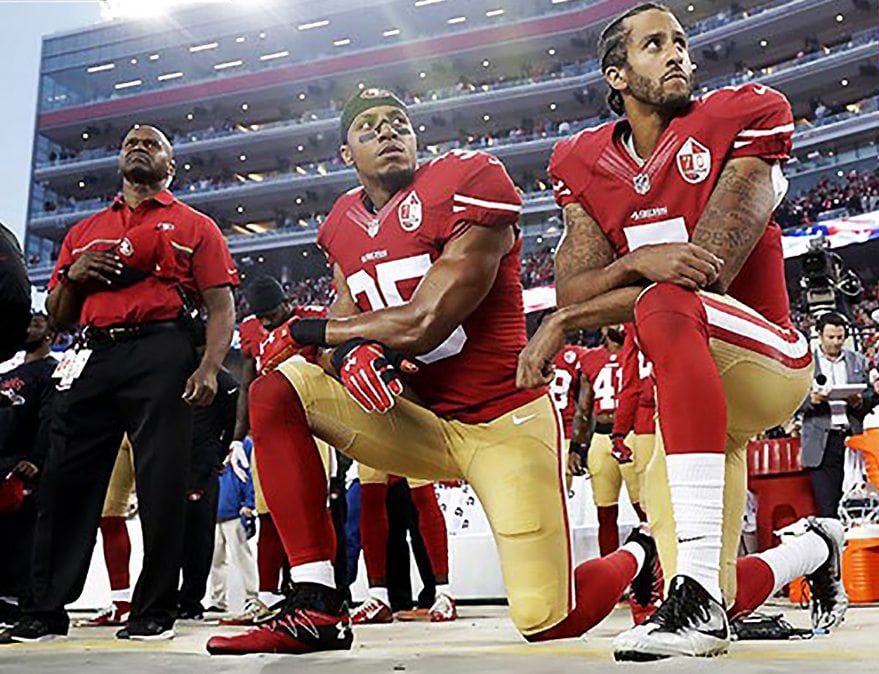 For two years I’ve watched lots of white Americans lose their minds in response to Colin Kaepernick and other NFL player’s peaceful National Anthem protests. I’ve seen them question these young men’s patriotism, malign their motives, attack their methods, and treat them with the kind of open contempt usually reserved for serial killers and child molesters.

For simply taking a knee during a football pre game in an effort to foster a conversation about the deaths of young men of color at the hands of police, these men have been made into the enemy by so much of white America. In some twisted, ironic, almost laughable missing of the point—it’s somehow become the angry black man’s fault for disparaging his country.

And ever since these white people first expressed the initial outrage (the kind they’ve sustained and that has resulted in Kaepernick still being unemployed), I’ve been looking to these same people for some semblance of grief at the unapologetic racism on display in this country, some anger at the pattern of supremacy and privilege in this Administration, some outrage at the sickening deja vu Americans of color are experiencing.

But I’m finding none of these things. Instead I’m finding victim blaming and rationalizing and elaborate efforts to tell us why our eyes aren’t seeing what they’re seeing.

They see humanity ignored, they see fear metastasized, and they see white people excusing away violence and discrimination and murder—instead of facing the brutal truth that maybe institutional racism is real and maybe Colin Kaepernick and his brethren are worth listening to, and maybe they shouldn’t be vilified outliers who we’re trying to shut-up.

Maybe we should all be kneeling right now.

White friends, if your immediate response to the shooting of a man or woman of color is to try and justify why he or she is dead instead of asking why they were shot, you may be the problem here.

If you’re more comfortable calling out kneeling football players than marching nazis with torches, you may want to ask why that is.

If you’re more incensed by a black reporter’s assertion that the President is a supremacist, than the fact that he is endorsed by supremacists, I’d look at that very carefully.

If you aren’t greatly burdened with grief for the families of people of color and you aren’t moved with compassion for the way scenes of their premature passing, repeatedly remind people that their lives don’t matter—you need to ask yourself some difficult questions about your own patriotism, your own appreciation of freedom, your own civic responsibility. You need to ask yourself whether you’re really for Liberty—or just for your whiteness.

Because from where I’m standing, I see Colin Kaepernick and those like him doing what many of you aren’t doing. I see them trying to keep more people from dying. I see them doing something to stop the bleeding instead of trying to make peace with it. I see them being the best of America in the face of the worst of America.

Right now we should all be taking an unflinching look in the mirror, white friends.

We should be digging deeper and facing our own acquired blind spots and inherited prejudices, and acknowledging the deeply embedded privilege that makes those things so very difficult to assess on our own.

We should stop defending songs and flags and pre game ceremonies, and some cheap, ornamental nationalistic pageantry—and actually be about the work of life and liberty that those things are all supposed to point to. We should be binding-up wounds instead of people of color, instead of heaping on the salt of shame and disdain.

And instead of demonizing Colin Kaepernick and blaming shooting victims, and instead of shouting down our brothers and sisters of color as they mourn—we should be listening to them.

More than that, we should be saying with our presence and our pain and our social media voices and our dollars, that we are grieving alongside them; that this is not okay with us, that this is not the America we want either.

The NFL and the President should see both us this weekend—acting in solidarity with Colin Kaepernick, affirming the deep patriotism he is actually living out at great cost, and visibly opposing the ugliness of systemic racism—the root of the former’s shunning of him and the latter’s public ugliness toward him.

We should be showing such unity every single day.

Our brothers and sisters of color should not be kneeling alone anymore.

Today white Americans, we should all be taking a knee.

(NOTE: This piece was originally published in September of 2016. The only modifications made, were to update the length of time since the initial protests and include recent events pertaining to the protests.)

720 thoughts on “White America, It’s Time to Take a Knee”