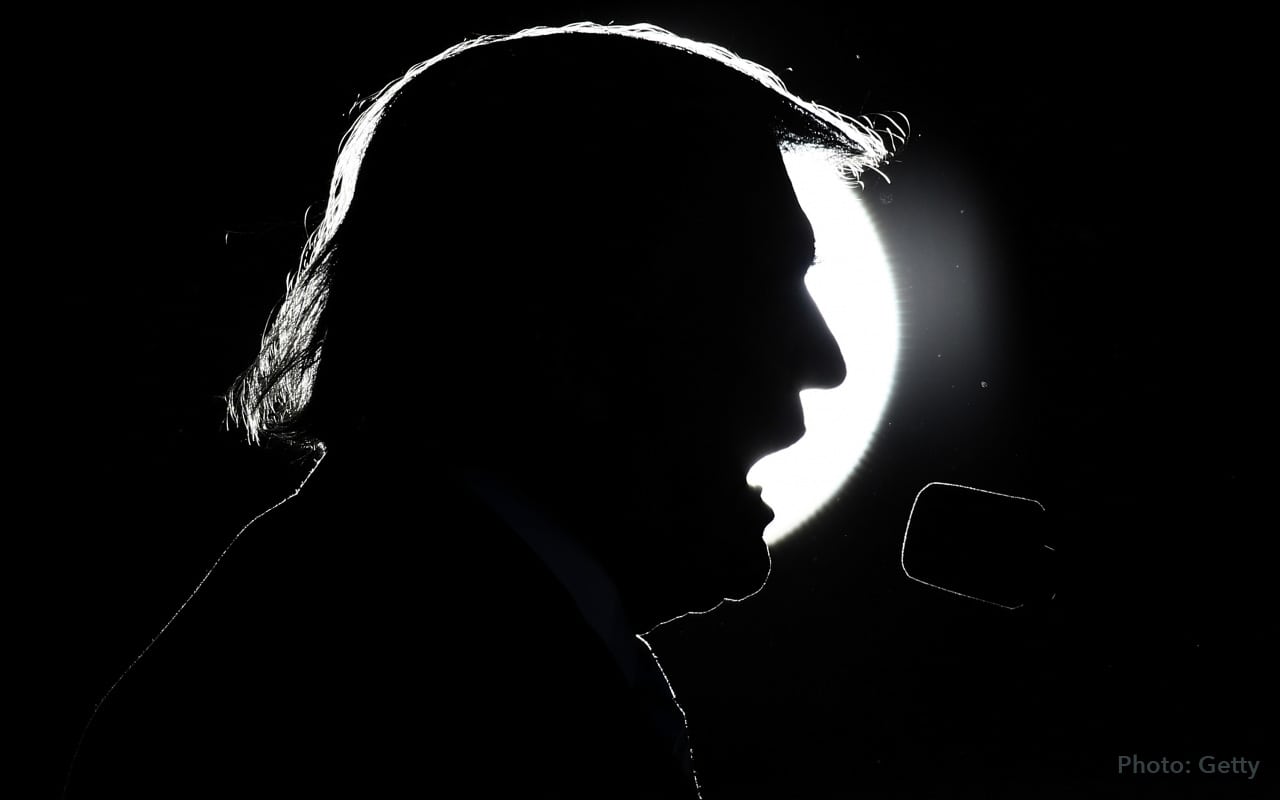 Even in the early days of the Presidential campaign it was a ludicrous idea: that Donald Trump was now a Christian; that he’d miraculously “found Jesus” right at the time he needed to pull in millions of Evangelical voters. Never mind that his life showed an open contempt for most of the things the Jesus of the Gospels lived and preached: humility, generosity, respect, empathy, kindness, peace.

The high profile-evangelists in his corner assured their rightly alarmed flocks, that behind the scenes Donnie was changed man, a “baby Christian” who’d now seen the light and was making his way down the narrow road of faith to lead us all to the Promised Land (where curiously America was first and everyone was white.)

Sure, he was on his third marriage and was heard on video boasting of his infidelity to his current wife. Yes, he said he could grab a woman by the genitalia. Yes, he advocated that protesters at his rallies be “roughed up.” Sure, he made fun of a disabled man. Certainly, he talked about walling off Mexicans and banning Muslims and taking away healthcare—but Donnie loved Jesus now, so all should be well with our souls.

The opportunistic religious leaders began publicly framing the vile, profane, relentlessly offensive Trump as a flawed, imperfect tool of God‚ and American church folk raised on a faith of fear and conditioned to believe they are perpetually in danger—began buying it. Little by little, it became okay, even sensible to call Donald Trump a Christian. (Talk about a miracle.)

And for someone who has served as a pastor for twenty years, the transformation was astounding and disheartening to witness. Millions of fundamentalists who’d previously spent their days parsing out Bible verses to condemn the LGBTQ community, Muslims, entertainers, Atheists, Democrats, suddenly became a people of Grace. They got really liberal with the Scriptures. They lectured those of us who questioned it all “not to judge lest we be judged”, and heaped shame upon us for bringing up example after example of the man’s hypocrisy, because “God looks at the heart” and how dare we assess another’s professed faith. (Somehow these things were never in play over the eight years they spent daily crucifying Barack Obama, but perhaps the issue there was one not of religion, but of pigmentation.)

But this far into Donald Trump’s tenure, Christians need to speak the truth that sets them free: Donald Trump is not a Christian. He can do every ceremonial, photo-op Bible Study he wants.

Yes, he may have shown up in a church during the campaign (looking as comfortable as a cow in a slaughterhouse), and he may have given some lip service prayer to one of his preacher pals while golfing, and he may have bamboozled scores of Christians already dying to believe it so they could make peace with their vote—but he is not a man following Jesus.

In his Sermon on the Mount, Jesus speaks these words:

“Watch out for false prophets. They come to you in sheep’s clothing, but inwardly they are ferocious wolves. By their fruit you will recognize them. Do people pick grapes from thornbushes, or figs from thistles? Likewise, every good tree bears good fruit, but a bad tree bears bad fruit. A good tree cannot bear bad fruit, and a bad tree cannot bear good fruit. Every tree that does not bear good fruit is cut down and thrown into the fire. Thus, by their fruit you will recognize them.”  Mt 5:15-20

Jesus says that we can judge people. We should evaluate the things we can see. We can measure devotion to God by what is manifested outwardly. We look at the “fruit”.

What is the fruit of Donald Trump’s life, of his marriages, his business dealings, his campaign, of his Presidency?

It’s rotten fruit, that’s what it is.

It’s exactly the kind of greedy, bloated, bitter, violent, self-centered, myopic existence that Jesus spent his life calling us to reject. So no, I don’t know the President’s heart or his inner confession of faith, but I have eyes and they see no love or benevolence or compassion—and that does matter to Jesus.

Christians need to stop insisting that Donald Trump is a Christian if they really care at all about people coming to know Christ. If that is the greatest burden on their hearts, using this man is tantamount to spiritual treason. It is a perversion of the Gospels that provides such a dissonance to the bystander, as to make Christ all but invisible. Until he says or does anything that remotely resembling him, we need to stop using him and Jesus in the same breath because it distorts Jesus by association.

Christian, you can continue to support this man, but don’t say you’re doing it because he is a man of God, a follower of Jesus, someone striving for Christlikeness. The putrid, stinking fruit of his life—says otherwise.

Jesus matters to me. The words he said matter to me. The life he calls us to live matters. Incarnating this Jesus in people’s lives matters to me. This is why that word Christian still matters. I am also a person of Grace, but I also live in a reality where the stuff we do is connected to what we believe.

I don’t know Donald Trump. He may actually believe he is a Christian. He may be so surrounded by sycophants and religious yes-men that no one is giving him the hard words about the kind of gentle, loving, sacrificial life Jesus called his people to live. If that’s the case I hope that he, like Saul will have a moment where his eyes are opened and he sees the goodness he might do with the power and influence at his disposal—and he is changed. But right now, using him as a symbol of the Christian faith is catastrophic for people looking on.

Christian, you might be tempted to argue with me or attack my position, and you would be welcome to, but I’d first suggest you go and read the Sermon on the Mount, spend some time in reflection and prayer—and then look with fresh eyes and tell me where you see Jesus in this man’s life and why you’re okay claiming it as your own.

1,339 thoughts on “Of Course Donald Trump Isn’t a Christian”