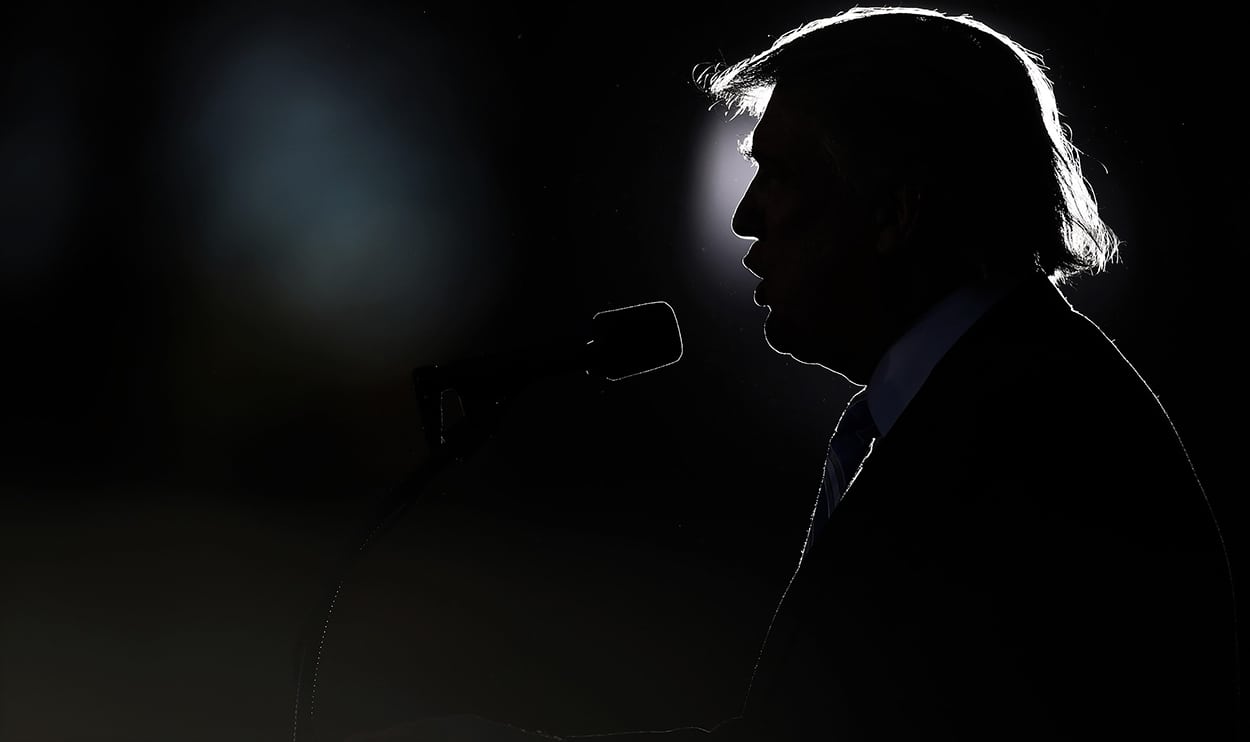 Lots of white Americans promptly and violently responded in a way that suggests she probably shouldn’t have stopped there:

‘Cause nothing says “we’re not white supremacists,” like a bunch of white people publicly bullying a woman of color for speaking out on white supremacy. That’s helpful and definitely not racist.

The White House joined in the caucasian outrage, with Press Secretary Sarah Huckabee Sanders declaring that Hill’s comments constituted a “fireable offense.” Maybe it’s me, but if calling the President a white supremacist is a fireable offense—then him actually being one sure as heck should be.

This is the heart of the hypocrisy on display here, and the reason Hill isn’t wrong, even if you disagree with her conclusions or her methods.

You don’t get to hire Steve Bannon, Stephen Miller, Sebastian Gorka, and Jeff Sessions—and simultaneously mount a high horse of righteous indignation at the suggestion that you’re probably a racist.

You don’t get to spend a lifetime exemplifying the absolute insulation from accountability that is white privilege—and get to play the victim card when a black woman brings it up.

You don’t get to call a violent horde of torch-wielding nazis in Charlottesville, “fine people,” and blame the deadly violence on “both sides”—and then act as if charges of supremacy are without merit.

You don’t get to call kneeling NFL black players “sons of bitches,” strong arm team owners into blacklisting them, and mandate their displays patriotism—and try to escape the reality that you’re a racist.

You can’t be the Presidential candidate officially endorsed by the KKK, and then bristle when people of color question your commitment to equality—especially when nearly every Cabinet appointment bolsters such questions.

And if you’re supporting this man, you don’t suddenly get to tone police someone for their audacity or cry “hurtful language”. If you’ve continually defended the King of Crass who you’ve applauded for “speaking his mind” and for “telling it like it is.”—that criticism of Hill doesn’t ring true. It also seems a disconnect to ask for a sports talk show host to be fired on grounds of inciting racial discord—when you voted for a man who has done nothing but fan the flames of bigotry.

In the wake of a white (and White House) wave of outrage, Hill has since publicly apologized for her comments and ESPN has “accepted her apology,” which honestly both feel like confirmation that she was probably right and evidence that Donald Trump’s America is turning back the clock on any progress we’ve made toward racial equity.

For a sports network whose heralded “30 for 30” series often documents the way sports, politics, and civil rights offenses have overlapped—you’d expect it to be among Hill’s most fierce defenders. I guess they haven’t been paying attention to their own programming—or they’re going to wait 20 years and feature her in an episode where they laud her candor.

We can argue all we want about what is or isn’t appropriate for a sports talk show host to comment on or whether Hill’s Tweets were abrasive to some, but that’s a fruitless diversion; it’s just talking around what we should be talking about here. It’s disingenuous for supporters of this President to feign offense at Hill’s tone or her bluntness. If they really want to call out vile hatred, stereotyping, and bullying—they need to check his recent resume again. That white people are more incensed by her comments than by Trump’s body of work, is exactly why we have a problem here.

White supremacy isn’t a club you officially join; something that either is or isn’t true. It isn’t like eye color or blood type or nation of origin. Saying you believe someone’s outward actions reveal a prejudice or an irrational fear is an opinion. Everyone is allowed to say what they see in us. People evaluate the fruit in other’s lives and make evaluations. You can disagree with their conclusions but that doesn’t mean they’re lying or wrong. Racism, homophobia, bigotry, misogyny, anti-Semitism can’t be proven or disproven. If someone says they see that in us we should pay attention.

Jemele Hill is a woman of color speaking plainly about her experience of America and about what she sees. Rather than arguing with her experience, telling her why she doesn’t see what she sees, or trying to badger her into silence—more white Americans should just shut-up and listen.

Maybe we should sit with her observations and sift them for their truth despite what feels offensive. Perhaps we should refrain from responding with the kind of ferocity and vitriol that illustrate exactly what she and others have been saying.

Maybe instead of defending a President whose Administration has displayed the very essence of privilege, white people should be trying to hear someone brave enough to speak that clear truth to a corrupt power. And if Hill’s position as a talk show host represents to you, a dangerous bully pulpit wielded irresponsibly, you may want to examine what the White House represents.

Perhaps white Americans should stop enabling bigotry at the highest levels of government and stop trying to silence people of color who speak out, whenever their words hit to close to home or piss us off too much. Maybe that outrage is an alarm going off inside us, telling us something stinks here—and it’s probably not a sports talk show host’s Tweets. Maybe we sense there’s hard truth there that we’d rather not deal with.

Not only that, but the white clergy of this country needs to condemn Donald Trump’s coddling of racists and supremacists instead of excusing it from the pulpit, instead of normalizing it and pretending Jesus is okay with it.

And a network like ESPN who understands and usually leverages and exploits the way that sports, politics, and civil rights intersect—should be using Hill’s comments to further dialogue on the racial fractures in this country, rather than simply shutting her down and pretending to get back to why LeBron James’ legs are getting too old to whether another full season.

Jemele Hill is right to speak and she shouldn’t have to apologize for seeing what she sees. If you feel she unfairly lumped you into a lazy stereotype that doesn’t apply to you—maybe you’ll understand how frustrating that is, and you’ll try to be more willing to see people as individuals and not caricatures you can accessorize as you wish. Maybe as a black woman, Jemele knows what that feels like better than you and I.

She’s giving White Americans yet another chance to prove that the pain of people of color is worth more than our discomfort at the expression of such pain.

Let’s not drop the ball.

103 thoughts on “Of Course Donald Trump is a White Supremacist.”