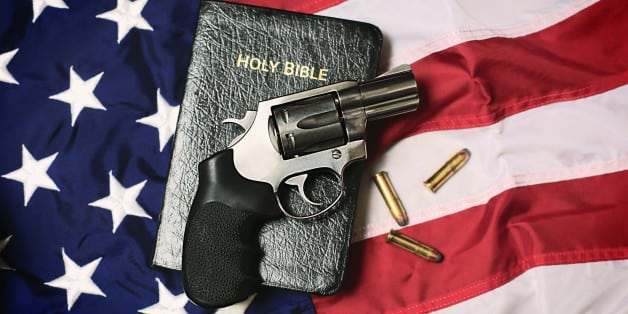 In the wake of the shameful growing legacy of mass shootings in America, one of the saddest realizations, is that the loudest, most vehement voices championing the cause of weapons of brutality—have come from professed Evangelical Christians.

The cognitive dissonance of supposed followers of Jesus choosing the side of violence and opposing the movement of mercy is staggering, exceeded only by the contention that Jesus says they can pack heat.

It’s nonsense and heresy and it’s a full bastardization of his life and ministry.

There simply aren’t any theological gymnastics wild enough to make it work.

Not with the Jesus who preached that those following in his footsteps would turn the other cheek to violence.

Not with the Jesus who spoke of the blessed nature of the peacemakers.

Not with the Jesus whose benevolence and lack of force were ever-present.

Gun-loving Jesus followers love to point to a passage in the Gospel biography written by Luke, where Jesus speaks about his impending unlawful arrest by Roman soldiers and instructs them to “bring a sword.”

This, they claim is their God-given gun license.

The problem is, they stop reading at this point, close the book—and run to their gun shows and NRA rallies.

They fail to stick with the same story for a couple of paragraphs; when the Romans arrive, and one of Jesus’ students named Peter, takes out one of said swords, and cuts off a soldier’s ear. Jesus verbally tears into Peter, heals the solider’s ear, and tells those with him that this will not be their way.

He then allows himself to be taken into custody, beaten, and ultimately murdered by his captors.

This is the full story, and it is bad news for those wanting to be cowboys.

Christians straining to hold on to their guns, talk about the story of Jesus fashioning a whip to drive money lenders out of the temple, as some half-baked gun blessing—which again is such a perversion of the story that it would be laughable if it weren’t resulting in so many dead school students two thousand years later.

Jesus chases the corrupt people out of the temple because they are profiting from the manipulation of religion. Jesus is driving out the modern-day NRA lobbyists, corrupt politicians, and religious hypocrites. He is running the vipers off and they are the vipers. (And by the way, he doesn’t kill or strike any of them in the process.)

This is why people outside Christianity think that followers of Jesus picking up the cause of tools of mass murder and rapid carnage is a blasphemous disconnect—because it is.
They’re seeing it all perfectly clearly.
They can see people trying desperately to make God in their own fearful, insecure, bullying image, and they reject it all.
They know enough about Jesus to know that his finger would never be on a trigger—and there’s simply no way to get around that.

In a last-gasp attempt to hold Jesus at gunpoint, these folks love to quote him talking in Matthew’s Gospel about his mission, “not to bring peace, but a sword.”

Again, they desperately want those words, but not their context or their intention. Jesus is speaking about the way his teachings will cause turbulence between people; the way interpersonal conflict will arrive when they endeavor to do his work of love, compassion, and justice: that it will drive a wedge, it will cause a rift—it will bring a sword. He isn’t saying he wants us to lay waste to our family members. He isn’t saying he came to bring people to hand-to-hand combat. (Yes, gun advocate Christians actually try to go here, to this ridiculous place.)

Those professing to take such words literally, may also be prepared to gouge their eyes out for looking at a woman lustfully—though I imagine this would leave a vast army of blind faithful folks in churches this coming Sunday.

No Christian, Jesus wants no part of your gun lust. He wants nothing to do with your seething nationalism and your 2nd Amendment shield and your tough guy bravado behind a trigger.

You can love your guns.
You can open carry in department stores.
You can champion the cause of assault weapons.
You can cover your bumper in tough guy propaganda.
You can oppose any sensible gun regulations.
You can glory in your amassed arsenal.
You can do nothing while thousands of people die every year in America.

Just don’t try and pretend Jesus is okay with it.

He weeps at it all.

And so do those of us who realize it.

126 thoughts on “No, Christian, Jesus Didn’t Say You Can Have Your Guns”