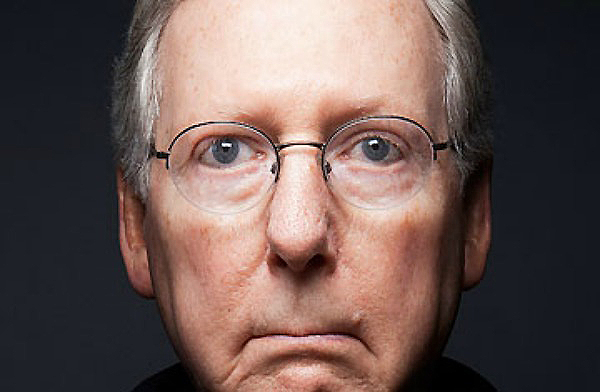 I love the look I saw this week.

It was the look of terrified dinosaurs realizing that the meteorite is on its way; the dilated pupils in the eyes of leadened, lumbering prehistoric monsters who’ve had their run of the house, now finding themselves at the precipice of political extinction.

As the most diverse Congress in our history began its session, it was a harbinger of what is coming for this nation, and what it means for their species. America is growing more diverse, and its representative leadership (though still painfully lagging behind) is quickly making up ground. They can see the change in the weather and the light in the sky—and they are scrambling to avoid the coming impact because they can sense it will not end well for them.

It’s why Mitch McConnell is holding the Government hostage over an ineffective, multi-billion dollar monument to racism of a border wall, that two-thirds of this country doesn’t want.
It’s why men like Tucker Carlson, rant mindlessly about successful women ushering in the “decline of men.”
It’s why Jim Mattis and Michael Cohen and General Kelly and Mike Flynn, and a perpetually revolving door of men are leaving or being forced out of positions of influence and leadership.
It’s why Republican leaders have spent the past year creating a massive straw man out of exhausted migrant families and refugee children, as though they were wealthy foreign adversaries rigging a Presidential election.
It’s why Right-wing trolls “leaked” a video of a college-aged Alexandria Ocasio-Cortez dancing, as if it was a clip of her saying she could grab less powerful men by the genitalia.
It’s why Liberty University President Jerry Falwell Jr, performed embarrassingly  contorted theological gymnastics, in order to align with this President over poor people.
It’s why Donald Trump spent Christmas Eve bunkered down in the White House behind a smart phone, tweeting scattered, rapid-fire nonsense—instead of being with his family or reading or God forbid, serving someone.

It is the white-hot fear that has overtaken them all.

They’re all in a scalding panic, because they understand that their brief moment in history to have their way and impose their will is quickly coming to a close. The landscape is being renovated, the climate is changing, and as a species they are dying—which is why they will do what all frightened animals do when they are backed into a corner and realize the level of the threat: they will grow more violent than ever before.

In the coming days, the Tweets will become more erratic, the legislative assaults grow more transparently desperate, the hate crimes more brazen, the sermons grow more alarmist and incendiary. These Jurassic, soon-to-be-amber-trapped relics, will act as if the very sky above them is falling, because in very real ways, it is. They will thrash and spit and bellow, in an effort to buy themselves a few more days and a bit more power and another Federal judge or two, but they cannot stave off their inevitable political disappearance, as progress and civilization and time swallow them up.

The misogynistic, supremacist nostalgia of their dying glory days is dissolving, in the glorious refining fire of what is coming on the horizon: color and diversity and new and young and wide open. The wall-builders and the close-fisted and the table-monopolizers will not survive this evolution.

America’s history is being rewritten in real-time by a fearless, disparate, interdependent humanity of every creed and orientation and nation of origin, and despite a reign that seemed like it would never end, the once mighty white dinosaurs are running out of real estate—and time.

Their eyes tell the story.