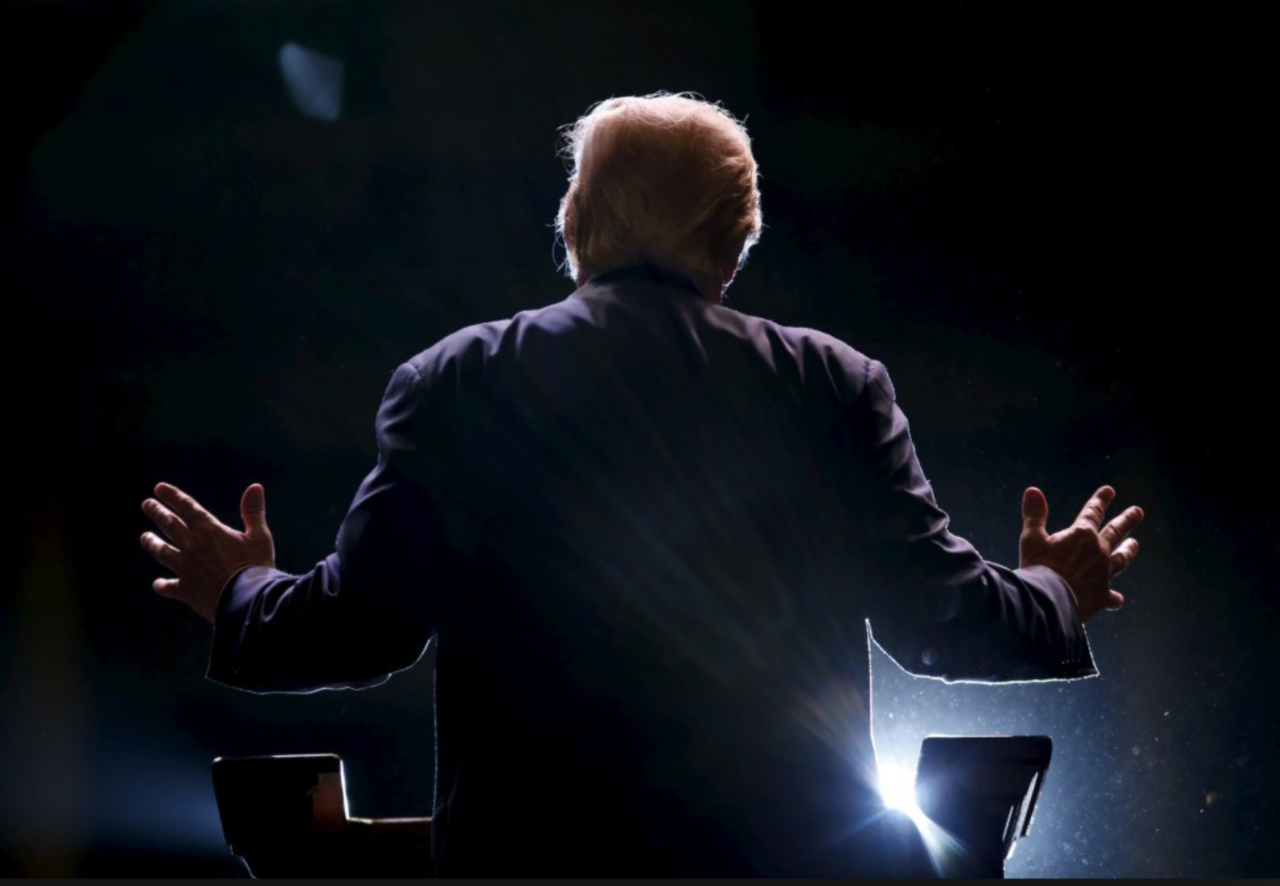 I’m getting really tired of people saying that this President isn’t a religious man.

The assertion is incorrect and unfair and it does him a terrible disservice.

Donald Trump is unquestionably a man of deep and abiding faith.

The evidence is unmistakable.

His words and his actions all testify loudly to his spiritual convictions.

The tangible fruit of his devotion is impossible to miss if you look closely.

He is steadfastly devout, zealous in his fervor, and peerlessly pious.

The President passionately worships a god to whom he is fully beholden:

This is his true religion.

It is the singular Gospel he hourly preaches from, in nonsensical social media diatribes.

It is the bully pulpit he passionately pounds in incendiary, racist rally rants.

It is the zealot’s cause he breathlessly evangelizes in photos ops and partisan press events.

It is the towering golden idol he fashions and to which his sycophantic multitudes gladly bow down.

Fear is the sacred text he consults whenever he needs direction—the stone slab he brings down from the mountaintop every morning to the needy rabble who await his two hundred and eighty word thumb-generated sermons.

It is the rigid doctrine he vehemently defends and the catalytic movement he has been carefully crafting for three years.

Donald Trump never stops evangelizing fear, continually preaching it wherever he is, in hopes of baptizing new believers into the terrified fold he tends to.

He is forever seeking converts into his faith and make no mistake—he is finding them in America.

His growing congregation is comprised of the angry and the scared, the easily manipulated, the old and isolated, people too lazy to seek truth, those lacking community, people who feel misunderstood and disrespected, those who subsist on phobias and prejudice.

This President gladly gives them all a savior who will validate their contempt for outsiders, a God who reflects their perpetually frightened hearts, a jittery deity as anxious as they are.

His theology of fear is astounding in its consistency:

He manufactures hellish nightmares for them and offers salvation.

He forecasts their disastrous captivity and promises sure deliverance.

He warns them of the invading hordes and pledges them protective walls.

He creates fake emergencies in their minds, declares that he alone is the truth that will set them free—and in their blind hysteria they gladly believe the lie.

He is a for-profit prophet keeping himself forever in the black; a good shepherd of very bad ideas.

The Gospel According to Don is good news to the privileged and the embittered, to those who imagine themselves threatened by equality, assailed by diversity, and about to be overtaken by people with brown skin and strange accents and distant birthplaces and unusual head coverings.

And they will continue to be seduced into this terrified religion until they are given a better one. They need an alternative cause to vote their lives to, a better place to aspire to.

The only thing that casts out fear is perfect love—which is why loving people are the only ones who can see through him.
They are the only people impervious to his scare tactics.
They know he is a high priest of nothing.

These people need to make themselves visible; to reach across divides of religious tradition and political affiliation and nation of origin, and show the cult of the fearful what something made out of love looks like.

And loving people need to preach louder right now, loud enough that it wakes fearful human beings from their stupor, enough so they can see this petrified sham of a holy man clearly and abandon a religion that only damages them and other people, and perpetuates division.

No, this President’s faith is a fact.

He is a deeply religious man.

We just need to stop letting him convert so many of us.