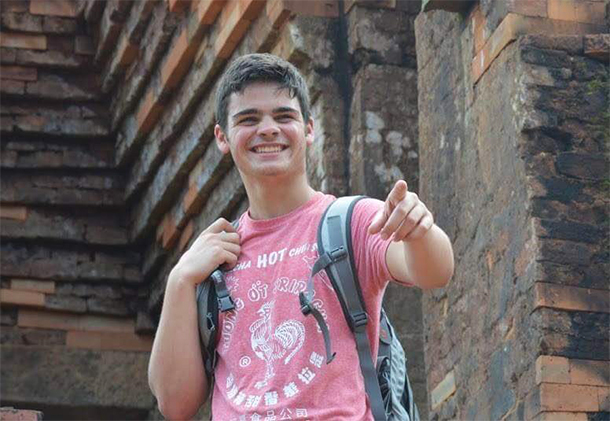 My cousin-in-law Steve, died this past week at the age of 23 after a heroic and lifelong battle with an autoimmune disease and blood disorder. I shared Stephen and his brother Sammy’s story in ‘Hope and Other Superpowers.’

Steve wrote this extraordinary essay in high school, about living while knowing you’re going to die.

Hope it encourages you.

You’re Going to Die, So Be Happy

It may sound morbid, but people have an expiration date. Sometimes people don’t even get a chance to make it that long. Car crashes, sickness, acts of god: all of these things have the potential to snuff out the light of life. I don’t dwell on this reality, I merely acknowledge it. Accepting mortality allows for a more fulfilling life.

You are going to die, so be happy.

Last year it was very likely that I had lymphoma. Various preceding medical complications, including a blood disorder and an immune deficiency, as well as two courses of early age chemotherapy had most likely mutated my cells into cancer cells. The outlook was grim, all of the tests came back positive. When I was first made aware of this, I did not know how to feel. I didn’t cry, I wasn’t angry, I was just puzzled. I thought, “Young people don’t get cancer”. Sure I have some other serious medical problems, but not anything as serious as cancer”. The enormity of the situation was very real and I understood it, but I just couldn’t bring myself to feel anything. The full effect of this news came crashing down on me about a week later. I would have panic attacks, and be unable to function. I finally knew damn well what emotion I was feeling, and it was fear. If things kept on going the way they were, I was going to die from panic long before the cancer got to me.
That’s when I made the conscious decision to accept the fact that I might die, and it might happen sooner rather than later. It was liberating.
Allowing the possibility of death into my life allowed me to move past my fear. I started focusing more on the time I thought I had left, making the moments count and not focusing on the petty trivial pursuits that had governed a large part of my life. Gone were my worries about the quiz I failed and if my hair looked okay that day (It did). I devoted more time to family and the things I liked to do. This was not denial, this was freedom. I realized that I might die, and this made me appreciate what time I had, and how much my friends and family cared. I was feeling better than I had in a long time. The news came that this wasn’t cancer, just a flare up of a pre-existing condition. The response my father received after relaying the information was “That’s cool”. Needless to say, he was surprised.
Nobody lives forever. Realizing this has made my life all that more precious.
I thankfully do not have cancer, although I am still 50 percent more susceptible than the normal person.
I make more time for the more important things, and I worry less about the small stuff.
Accepting that death is as much a part of life as life itself, allows for a more fulfilling and rewarding existence.

If you’d like to make a donation in Steve’s memory and perpetuate his life, you can do that at DoBetter4Steve.