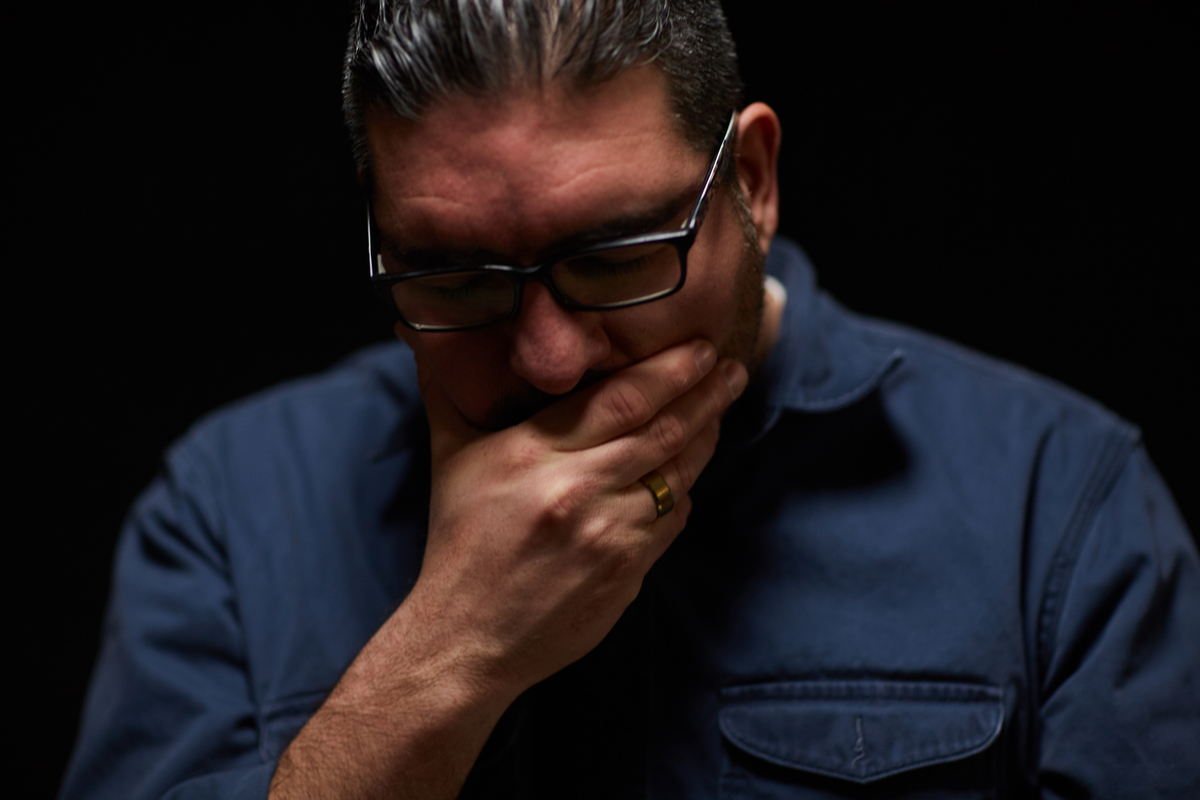 It was a few days after Christmas and I was sitting in a car outside our Central New York hotel, with heavy snow swiftly obscuring the world outside the windows. My tears turned cold as they ran down my cheeks, and my labored breath shot white clouds like fireworks in front of me.

After months of a slow and steady slide into a now lingering sadness that would not lift—all my exhausted mind could now process was, “I’m done.”

I didn’t want to kill myself (at least I didn’t process it that way in that moment), I just felt as though I’d exhausted every possibility that a living person could to not feel like this: prayer, therapy, meditation, medication, working out, nature, journaling, art, breathing exercises, positive thinking—and it was all presently failing me. I’d simply run out of options and energy, and I was through looking.

It didn’t matter that all the objective evidence of my life testified that I should be happy, that I was fortunate, that I had so much to be grateful for, so much to want to live for—none of that registered in that moment, none of that tipped the scales toward hope. The dire story I told myself didn’t require data. It never does.

That’s what people don’t understand about those of us who live with the inner monsters: intellectually we understand that this makes no sense, which is often part of the problem. We don’t just feel terrible—we feel guilty for feeling so terrible. We have a chronic pain with no discernible source, and so we hurt and we feel stupid for hurting. Telling us how much we have to live for and how good our lives are sometimes makes us feel worse.

For many people, life can be a daily battle to stay positive.

For people with severe depression, life can be a daily battle simply to stay.

While everyone finds themselves occasionally slipping into moments of expected sadness when trouble or conflict or tragedy visit—we are often standing hopelessly at the precipice of the abyss for no good reason, staring into the black void and wondering why we’re here again: dying to leave and trying to live.

Depression brings a heavy and hovering despair that requires no measurable cause to exist, and so when tangible difficulties do come, when actual difficult circumstances and struggles finally arrive—they can become the final straw, they can push us over that edge.

I think that’s what people without mental illness don’t understand about days like these, when so much cruelty is being cultivated and when leaders are manufacturing such prolific violence and when decency is in such great demand: they are potentially deadly days for us. It is the outside world and our own heads both agreeing that it’s hopeless.

I managed to pull myself out that night. I’m not sure how. The hows and whys of who makes it and who doesn’t in this battle usually defies understanding. Lots of good, loving, intelligent, faithful people don’t make it.

I only know that I somehow stepped back into jagged, bloody trenches of life and decided to keep fighting. I had just enough in my reserves of energy or I grabbed a fleeting moment of clarity enough to realize that I needed to keep going; to step out of that car and that moment. Then I let a few people into the hell I was walking through so that I wasn’t walking it alone.

But I could easily have not done those things—I could have been one of the millions of people whose exhaustion simply won in the disorienting chaos of the swirling sadness.

And the thing about it is, if I had given up, if I had walked further into that done-ness to something worse—no one would have seen it coming. I would have simply been another person with so much to live for, being eulogized by stunned loved ones who were trying to make sense of the senseless.

Like so many people who struggle with depression, I can be really good at hiding it. We have to be. It’s part of the gig. We hide because we feel like a burden and we hide because we hate admitting we’re losing.

I tell you that because there are likely people around you who you love dearly, who are hiding as well. Do your best to see them and to step into their lives and to let them know they matter and that you want them to stay—but also to let you know that that may not be enough and that it will not be your fault if it isn’t. Sometimes all the love in the world isn’t enough to save people. It’s really difficult from the outside to speak louder than the voices in someone’s head.

It has been beautiful and horrible—and it’s rarely been easy. Mental illness doesn’t afford you much easy.

I do want to stay, so I still do all the things I can do to not feel that way I sometimes still feel. I have a daily regimen of prayer, therapy, meditation, medication, working out, nature, journaling, art, breathing exercises, and positive thinking—and yet there are still fleeting moments when I look down and see only the void.

Until some miracle cure comes, I and the millions of us who walk this nonsensical, exhausting road will be here alongside you do what we can do: dying to leave and trying to live.

(Note: If you’re struggling with depression, desire to self-harm, or suicidal thoughts, talk to someone at the National Suicide Prevention lifeline at 1-800-273-8255.

You are worth fighting for.)