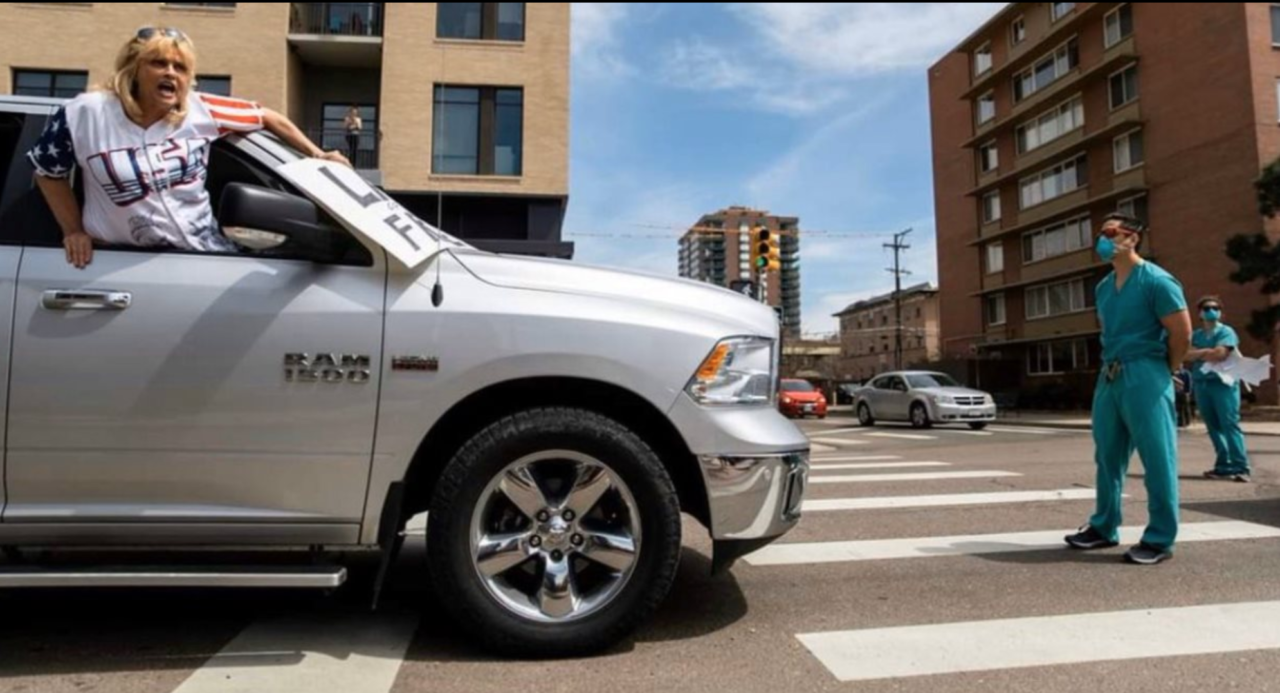 I mean, at this point it isn’t really up for debate, is it?

You can come clean now, fess up, and drop the facade:

You never really were pro-life, were you?

It’s okay, we suspected as much.

We suspected that you weren’t really burdened to protect humanity, as you cheered while families were separated at the border, as you ignored yet another bloody school shooting, as you applauded the dismantling of our healthcare system, as you turned away exhausted refugees, as you laughed during his anti-immigrant rally rants. We figured that outside of gun owners and white embryos, that you really weren’t in this to defend the living.

But now, it’s all out in the open isn’t it, friend?

When you’re stopping traffic filled with ambulances and delivery trucks,  and protesting wellness protections designed to keep people from getting sick and dying, and standing opposite nurses in face masks who are literally keeping people breathing (or when you applaud people who do)—you’re showing your hand.

For all your wild histrionics and your raw-throated rally cries and your garment-rending sermons and all your impassioned social media posts about the sanctity of life—here you are in the middle of a raging pandemic, packed together like lemmings, ignoring distancing of any kind, harassing essential workers, and demanding to be allowed to infect yourselves and others—while without a trace of irony, screaming “My body, my choice!”

You’re complaining about your greying roots and your cabin fever and your bored kids, while 41,000 Americans have died, three quarters of a million are sick, and thousands are currently battling to win a fight for their lives, flanked by the very selfless caregivers whose work you are actively undoing.

Don’t you think that’s a little ridiculous as a supposed pro-life human being?

I don’t suppose you can see it.
I guess that’s how hypocrisy works.
I suppose that’s what cults do to people.
Honestly, it must be hard keeping up with his mental instability.
I imagine you’re so confused by your allegiance to a serial liar, that this disconnect is invisible to you.

I’m sure it’s exhausting trying to keep up with who and what you’re supposed to be outraged by.

For weeks it was the Dems for perpetuating an elaborate hoax, then it was the liberal media for exaggerating the threat, then it was at China for supposedly hiding a deadly pandemic that he said he’d warned you about from the beginning, then it was Barack Obama for… well, for something.

And now? Now, you’re being told to be outraged by the efforts of doctors, scientists, informed governors, and trained professionals—to not make more people gravely ill. Now, you’re being prodded by your president to see human beings as acceptable loses in the righteous cause of capitalism.

(I don’t suppose you want to hear what Jesus says about all that, do you? No, I wouldn’t either.)

You’ve always claimed to be so burdened because 4 people died in Benghazi. That was your go-to “pro-life” Hillary slur. 41,000 Americans have now died, and you’re out here yelling at nurses. Donald Trump is a 10,000 Benghazi president and you’re still full-on MAGA and demanding you be allowed to go to the nail salon and the beach.

I think that’s the moral pickle you’re in, friend: you want to be pro-Trump and pro-life, and those two things are mutually exclusive—because the former has no regard for the latter.

But this isn’t about him—this is about you.

You’re also an adult human being, with a brain and free will, and you are making choices in these days that declare what you value.

772,000 people are sick. I’m pro, their lives.
41,000 have died. I’m pro the lives of their families and loved ones.
Hundreds of thousands are immunocompromised, and this illness would likely be a death sentence for them. I’m pro, their lives.
Hundreds of thousands could be carrying or exposed to the virus by recklessness now. I’m pro those lives, too.

I’m going to contend that if you are standing in defiant, middle finger opposition to doctors and nurses and science, and protections placed there to keep you and others from being brutalized by a virus and taken too soon—that you’re not really fighting for life.

Maybe you need to rethink what you value.

Maybe you just need to admit who you are.