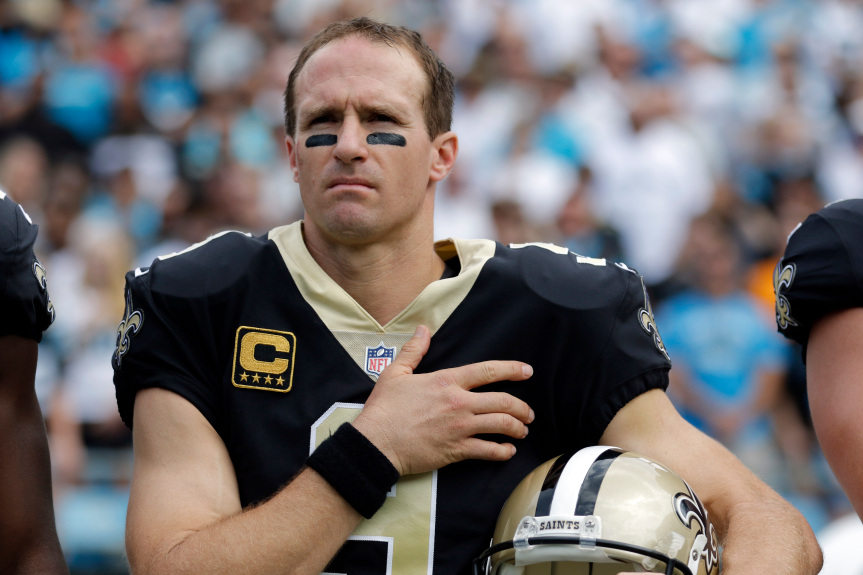 New Orlean Saints Drew Brees is by all accounts a really good guy: philanthropic, generous, and beloved around the NFL. He’s the kind of rugged, earnest, faithful team leader sports makes superheroes out of, and the all-American Brees has fit the bill perfectly for two decades—which makes his new comments on NFL players possibly kneeling in protest in the upcoming season so jarring, especially given the raw and turbulent moment he’s delivered them into and the place in which he’s made his home for so long.

In a recent interview with Yahoo Finance, Brees stated, “I will never agree with anybody disrespecting the flag of the United States of America or our country.’

The quarterback elaborated: “Let me just tell you what I see or what I feel when the national anthem is played, and when I look at the flag of the United States. I envision my two grandfathers, who fought for this country during World War II, one in the Army and one in the Marine Corps. Both risking their lives to protect our country and to try to make our country and this world a better place.”

Brees’ statement on the surface might seem benign, until you remember where we’ve been and how close to this he is. From the very genesis of the movement started by Colin Kaepernick in September of 2016, NFL players told us why they were kneeling before games. They were explicit and consistent in describing the act as a silent, non-violent appeal for white Americans to be aware of the violence by police against people of color and to come alongside them in the effort to bring justice and equality to a nation still severely lacking in both. Unequivocally, they declared that this was never about anything else but that—until it became a MAGA talking point.

Enter President Donald Trump, bringing a false narrative designed to pull public support among fans away from the players, by framing the posture as an attack on the flag, the anthem, the Military—on America itself. It was a master stroke of leveraging the latent supremacy and nationalism always bubbling just below the surface in his largely white base, and millions of Americans took the bait, apparently including Drew Brees. (The ripples of Trump’s successful PR manipulation flowed all the way up to NFL owners who proceeded to squash protests and blackball Kaepernick.) Never mind what the players themselves were actually saying, which is the point here: privilege creates its own mythology where it justifies white subjugation of black voices—and in this case, it cost Kaepernick his career while Brees has enjoyed another four years as the Great White Hope of a city.

Drew Brees is a good reminder that perpetuating racism isn’t just about bad people saying and doing openly racist things. It isn’t just about egregious acts of violence or vile words spewed at strangers by openly ignorant bigots with Confederate flags hanging off their front porches. It’s about the buffers and barriers to suffering afforded by our privilege as white people that allow us (as good and compassionate and open as we might try to be) to live with blindspots that show up when inequity is revealed and when our assumptions are challenged. In those moments, our response is often to rationalize away the truth in front of us when that truth might reveal those blindspots, illustrate the ways we’ve benefitted from a broken system, and shatter the false story of equity that we told ourselves existed.

When you’ve lived in a privileged story (as all white people have to some degree), that story feels normal and it often doesn’t occur to us that there is a fundamentally different experience of America, of liberty, or law enforcement. When you’ve benefitted the most from a system, it’s easy to embrace a narrative that protects that system—which is why Drew Brees, as integral a part of this league as he’s been, and as closely as he’s lived and worked alongside men of color for two decades, and as connected with a city that has endured unspeakable racial trauma as he is—can still possess a story where marginalized communities asking for equality can be interpreted as attacking the flag or disrespecting the Military (again, despite the voices of those people). That is a much more palatable option than admitting that your whiteness has protected you from a harm many people experience as their default setting and is calling you to face the injuries sustained as a result.

Brees likely had no idea his words would be received as poorly as they have been or be as damaging as they are—precisely because he is a really good guy, because he doesn’t see himself as racist, because he doesn’t do and say the things racists do. That’s also why his remarks, as unsettling as they are, are helpful. They can be instructive to white America as we navigate the fractured nation we’re living in: they can help us understand that racism is a system as much as it is a behavior and that privilege makes seeing and confronting that system a daily exercise in chipping away the false story we’ve told ourselves.

The only way to even begin to do that is to get better stories; to continually talk to people with different experiences of America and law enforcement and liberty—and then, to reflect on our own road retrospectively and look for the ways we’ve been afforded opportunity, or spared struggle, or had a clearer path than our brothers and sisters of color; to ask ourselves the question: How has my road been easier because of my pigmentation?

The more we do that, the better we’ll be able to see through the false narratives that seek to silence marginalized voices that disrupt the story we tell ourselves of an equitable nation: a story that makes us the hero and people who have lived without justice demanding justice, the villains.

When that happens, we’ll be able to accurately see America as being forged in the crucible of privilege—and burdened to remake it into something more beautiful.

As we do this, let’s center on the voices of people of color and on the issue at hand, which is the killing of black people by police and a culture that has normalized this kind of dehumanization for two hundred years.

UPDATE: Drew Brees apologized for his remarks and publicly corrected Donald Trump when the president tweeted an attempt to once again make the protests about the flag.