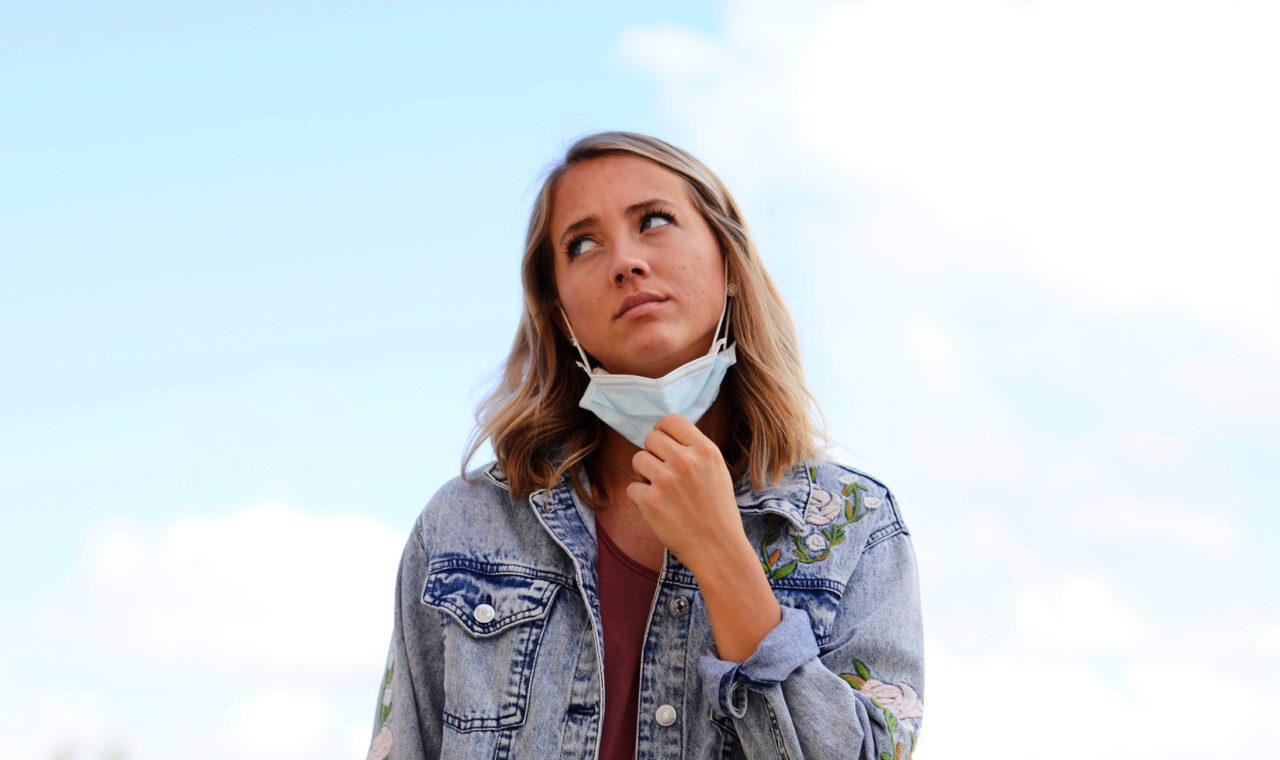 Yesterday, I stumbled into a war zone.

A friend of mine was being besieged on social media by a furious crossfire of rapid-fire vitriol from a disparate army of toddler moms and dudebros, in full-throated outrage because she’d had the stratospheric gall to post an article about the merits of wearing masks to prevent the exponential spread of a virus that has already ravaged the planet.

This apparently was a salvo so offensive that it could not go unpunished—so they began a brutal and coordinated keyboard frenzy.

It was a familiar sight, as this kind of virtual civil war is playing out thousands of times a day, and the responses to my friend were the fairly typical mix of anti-Science religious speak, ‘roided-up tough guy posturing—and lots and lots of flag-waving, chest pounding, Don’t Tread On Me nationalism. (Not wearing a mask, apparently makes America great—somehow.)

This is where we are, America?

That’s what it’s come down to?

Half of you still won’t do this?

Despite how many people have died, despite how decimated our economy is, despite the near complete shutdown of life (that you’ve been moaning like a dirty-diapered infant for months about)—this minuscule task is too much to ask?

A mask is the small, selfish, ignorant hill you’re choosing to die (and kill) on?

The multitudinous non-maskers aren’t a monolith, of course, but most can be loosely organized into two groups:

1) Self-centered narcissists, who simply refuse to make the smallest sacrifice for the health and well-being of others, because they’ve been so weaned on individualism and have so little appreciation for interdependent community—that anything less than completely unfettered freedom feels restrictive.

2) People with such a cultic adoration of this President that they refuse to wear a mask, because to do so would mean that he was wrong all along and that they were lied to and that we are in grave danger—so in an oxymoronic attempt at self-preservation, they swallow a toxic cocktail of tearful nationalism, Fox News fakery, macho flexing, and willful ignorance—and kill people to own the Libs.

Non-maskers, this isn’t about your personal freedom.

It is not akin to choosing whether or not to wear a seatbelt—it’s choosing whether or not to drive blindly into a crowd. It is deciding to place other people in danger along with yourself. Saying, “If you want to wear a mask, fine, but don’t force me to,” is an explicit declaration of an ignorance that can’t or won’t tell the difference between a choice that affects only you and one that affects everyone.

This isn’t about physical toughness, either.

One of the oddest phenomenons is people flexing in the face of a pandemic, as if not wearing a mask proves toughness. It doesn’t. It proves you don’t pay attention, that you don’t respect science, that you reject critical thinking, and that you lack working empathy. It’s nothing to boast about.

One of my friend’s maskless assailants came in late to the battle, with the kind of rhetorical, passive-aggressive query that feigns curiosity but really doesn’t want an answer.

“So, what’s the plan, here? What do you want to see happen? Are we going to wear masks for the rest of our lives? Are we going to live in fear forever? Help me understand your long-term plan?”

The “long-term plan,” oh maskless ones, is to be a decent human being, to distance, to use restraint, and to wear a mask because 120,000 people have died in four months, because there is no treatment and there is no vaccine—and until there is, people fortunate enough not to be planning funerals right now, shouldn’t act like a piece of cloth over their mouths is oppression or hardship.

Stop pretending you’re suffering when you’re just being asked to be a decent human being.
Berating someone for asking you to be considerate is as low as it gets. It shows an immaturity that cannot feel compassion for others in pain and doesn’t understand adult accountability.
Shooting side eyes or mocking people at the store who have more consideration for humanity than you do, is only a projection of an insecurity that suspects this is a really stupid cause to push against.

We have these casualty numbers (which you claim are negligible) precisely with and because of months of shutdowns and safeguards—not in spite of them. If we hadn’t adhered to these practices and restrictions, the numbers would be exponentially higher—the same way we’ll see continued spiking because people like you are strident in your steadfast refusal to care. If everyone wore masks, we could have a relatively normal existence without massive infections, but because half of us won’t, we’ll be in this another 8 months, and many more people will get sick and die.

If you refuse to wear a mask in a pandemic, you’re not making America great.

You’re abusing your freedom, you’re intentionally placing fellow citizens in harm’s way, you’re damaging the economy, and you’re dooming us to far longer restrictions than if you simply put a piece of cloth over your mouth.

If you refuse to wear a mask in a pandemic, you’re also not pro-life.

You are showing a reckless disregard for yourself and for loved ones and for strangers: the supposedly sacred lives you preach to treasure in the womb, but in practice really aren’t all that concerned with outside of it.

And if you refuse to wear a mask in a pandemic, you’re just not a very good person.

We’re in an unprecedented health crisis that has shut down the world, and you won’t do literally the simplest thing you’re being asked to, in order to prevent other people from getting sick and dying.

It will look great with a headstone.

Note: Obviously, people with health conditions and PTSD which make wearing a mask difficult or impossible are exempt from this piece. (The rest of you know who you are.)