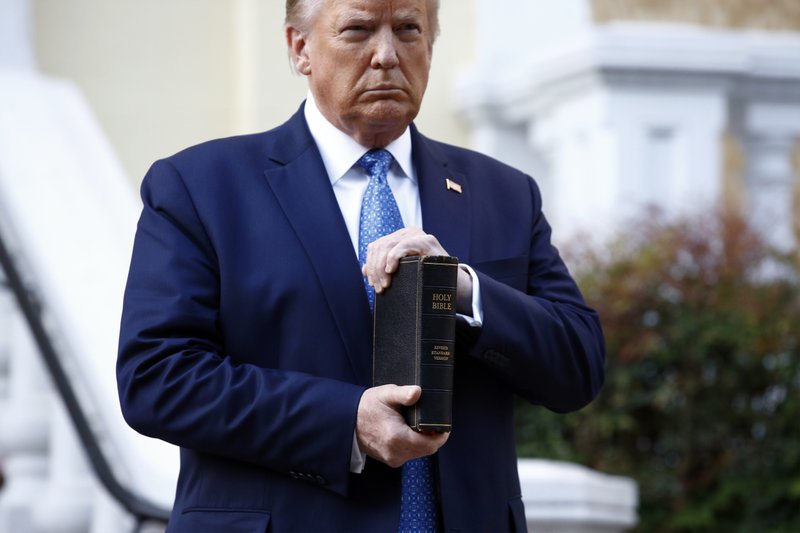 I thought of you today.

I was reading the Bible. (You may remember the Bible from a sitting president’s recent upside-down, tear-gassed, church steps photo op.)

I came across Matthew’s story of Judas’ final moments here on the planet: overwhelmed with guilt, in a searing, sweaty panic—realizing that he had betrayed his beloved Jesus and sent him to an unthinkably violent death, all for thirty cold pieces of silver that now felt worthless in his hands.

He’d kissed him and he’d killed him, just to gain a quick windfall that he suddenly realized was fool’s gold.

He died knowing he’d forfeited his soul and couldn’t get a refund.

I wonder if you will ever have such a last-minute awakening: a similarly sickening moment of clarity-come-too-late, when you look around and see all that you’ve destroyed and how many people you’ve grievously wounded—and if you too will realize that you’re now permanently in the red because you have abandoned your namesake for another name that adorns very different kinds of buildings.

Take a moment and survey the coins in your hand, now, friends.
Roll them around your fingers.
Feel the weight of them.

Your thirty pieces of silver were these last four years,
some Supreme Court Justices,
a couple hundred lower court judges,
the temporary high of a few political wins,
the bully pulpit of a President’s Twitter feed for forty-eight months,
and perhaps soon, loss of a woman’s right to autonomy over her own body.

That was your soul’s selling price.

Was it all worth betraying Jesus for, I wonder?
Was it worth brutalizing the already vulnerable and oppressed, whose lives he said he inhabited?
Was it worth aligning with this petulant, profane Caesar in all his pervasive and prolific violence?
Was it worth driving a generation from the Church that Jesus built to be a refuge for wanderers, a balm for the hurting, a destination for weary pilgrims, and a home for prodigals?

I’m out here with the multitudes who will never darken the door of one your gatherings ever again because they’ve seen your greed.
I’m here with those whose last remaining tethers to religion have been fully severed seeing you abandon the tender world-loving heart of Jesus, in favor of a thin facade of nationalistic bravado.
I’m here alongside hundreds of thousands sitting vigil for a democracy teetering precariously on the edge of death at your doing.
I’m with the disparate humanity who can find something redemptive and beautiful— anywhere else but alongside you.
I’m here with those whose grief you have manufactured, whose peace you have interrupted with chaos, whose voices you have intentionally silenced: with the poor and hurting and the hopeless.

I’m there because Jesus is there; where he’s always been. You are there with those thirty coins and the time that is running out. He will outlive you.

I imagine you’re not able to mourn any of this right now; that you still feel like you’re winning. You are still in between the payoff and the wake-up, and so all you’re feeling is the fleeting rush of a deal with the devil that always seems like a win—until it doesn’t.

But one day soon (either here or hereafter) you’re going to reach the place all Judases eventually find themselves: realizing all they’ve lost to gain a world:

They’ve lost everything that matters.

Hope those thirty pieces of silver were worth that.