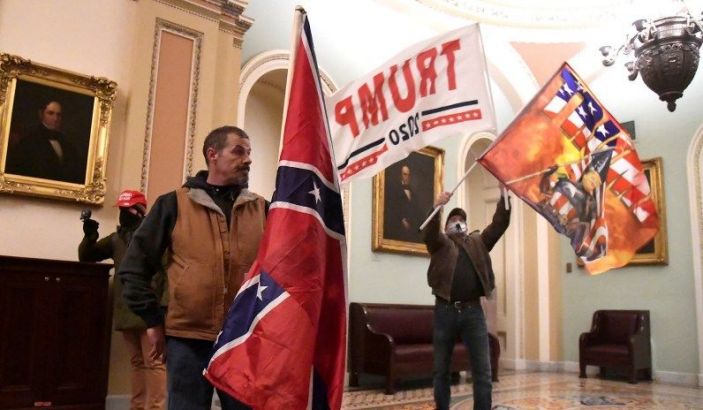 A brazen act of white domestic terrorism on our nation’s Capitol: thousands of people streaming toward the seats of Congress, with nothing between them but a flimsy chain link fence and a few glad-handing police officers, who essentially gave the armed insurrectionists a warm welcome, a grand tour, and escorted them with kid gloves into the sacred chambers of the most vital work of our Republic: affirming the collective will of the people to choose their leadership.

Members of Congress barricading themselves with file cabinets and coffee tables, while on the other side of their doors, gun-wielding, delusional sycophants of an outvoted despot, made a mockery of statues of our forebears and urinated on hundreds of years of history, in between selfie sessions with officers showing less urgency than at Walmart Black Friday sale.

The only thing it was not—was surprising.

Not to anyone who has been paying attention.

We’ve been trying to tell you this was coming for more than four years.

Media members, lawmakers, pastors, mental health professionals, and students of history have been meticulously recording in real-time, thousands of legislative assaults, incendiary Twitter tirades, Constitutional crises, open abuses of power, and unthinkable acts of cruelty—any one of which, in a different Administration under a different president in a different version of his party, would have been enough to trigger the most decisive and swift response.

But in this Administration and with this President and with this party, the daily atrocities simply became numbing white noise, to tens of millions of Americans gradually desensitized by the volume and severity of their criminality: part of the normalizing of violence and lawlessness that much of America is complicit in.

In the moments immediately following this terrorism, “How did this happen?” was a question revealing in those asking it, either a lack of information about his malevolence—or an embracing of it. It was either an admission of ignorance or a declaration of affinity.

This unprecedented act of collective treason was not a spontaneous event triggered in a few seconds by another of this sociopathic president’s irresponsible tirades in the moments immediately preceding it.

This stomach-turning and terrifying assault on Democracy (that if not planned, coordinated, and sanctioned by Trump and those around him and working for him) was announced well in advance and with great specificity since the very genesis of his 2016 presidential campaign.

This was the slowest moving and most predictable coup in our history.

It happened because it has been four years in the making.

The chorus of the outraged and the disbelieving has resounded loudly in its wake:

That is either a lie or an error.

The truth is, had the mob been made of people of color, they’d be dead, severely wounded, or in jail right now by the thousands. They’d have never made it within one hundred yards of the steps, and certainly not allowed to parade around inside the halls of Congress for hours, wearing combat gear and zip ties broadcasting their intent to kidnap or kill politicians seeking to do the will of the American people, all to please a cult leader who has groomed them for this very moment.

But this was not ANTIFA.
It was not Black Lives Matter.
It was not the “Radical Left” descending upon the Capitol to violently overturn a free and fair election by the people.

This was MAGA in all its naked ugliness, what it has always been:
It was the white sycophants of an unhinged despot, doing exactly what he told them to do over and over and over again, what his lawyers and Fox News and Evangelical preachers and Republican leaders have urged and emboldened them to do: take the law into their own hands when it is unpleasant or uncomfortable for them.

The truth of the planning and execution of this specific assault on our Republic will come out and those responsible will be held accountable—but in this moment, without and caveats or conditions, we can declare unequivocally:

This coup was not unexpected.
It was tragically predictable.
It was exactly and precisely who this president is, what his party has become, what much of America has been since its inception, and who his base is at its core.

We should be sickened and terrified and outraged to our collective core about this historic act of treason we witnessed.

We just shouldn’t be surprised by it.