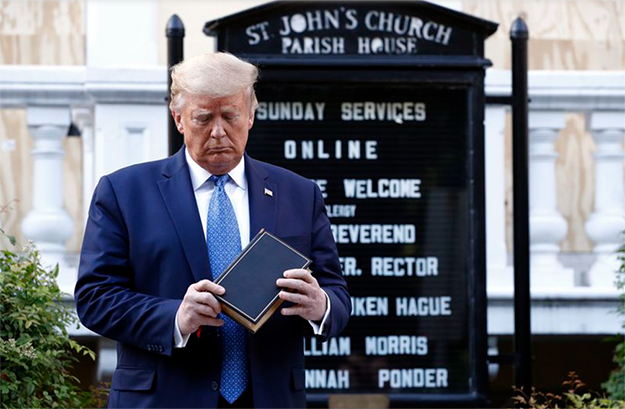 “God will not be mocked.”

Growing up a Christian, I’ve heard that phrase more times than I can count, often punctuating the finger-wagging sermons of sweaty, red-faced televangelist’s in their daily thunderous diatribes against the evildoers assailing the world, or the joyless sermons of stoic minsters returning to a tried-and-true playbook for one more Sunday morning.

The words were often the closing salvo of coming condemnation: the dire warning uttered by professed righteous people claiming to have knowledge of the Almighty’s searing anger and coming wrath—against the gays and the abortionists and the socialists and the immigrants, and whoever else they needed to manufacture fierce urgency about in order to manipulate their faithful.

“God will not be mocked.”

It was the threat of certain hell wrapped in paper-thin facade of concern for doomed souls.

It was a weaponizing of God against people that God supposedly loves but cannot be in the presence of.

It was coercion covered in religion.

In other words, “The ‘Man Upstairs’ is paying attention, and you’re gonna get what’s coming to you!”

I no longer imagine God to be neither a man nor residing upstairs, still I’m hoping the last part is still somewhat binding.

The phrase “God will not be mocked” actually comes from a New Testament book called Galatians, a letter to a growing local house church community from their wayward pastoral leader. The passage speaks to a truth that we will one day be accountable for our actions, imploring the hearers and readers as people of faith in Jesus, to be steadfast in doing good because goodness is the point—because that goodness is their calling.

I don’t know how all of this shakes out in the hereafter and just what kind of accounting we all have to make after we exhale one final time here, but I confess that lately I’m hoping the warnings about evil people getting theirs are well-founded.

I look around and I see them everywhere now, these ridiculing clowns of upside-down Christianity.

We are in a golden age of God-mockers.

They have ascended to the highest places in this nation, collecting all the earthly spoils of phony righteousness, leveraging every bit of counterfeit religious fervor, wielding all manner of perverted power.

Today, while these self-righteous charlatans wildly parade their fake good Caucasian American news to a world and a people they are unrelentingly predatory toward, seemingly without consequence or penalty, I hold out a bit of hope that one day they will face the justice that seems to be absent here.

I am hopeful that the brimstone, fiery warnings I was weaned on were true, even if the recipients were a bit off.

I pray that people of deep faith will not grow weary in doing good while watching the bad people prosper, and that whether or not justice evades them hereafter, that we do not allow them to injure humanity unabated here.

Even if God will be mocked, let us not abide it on our watch.