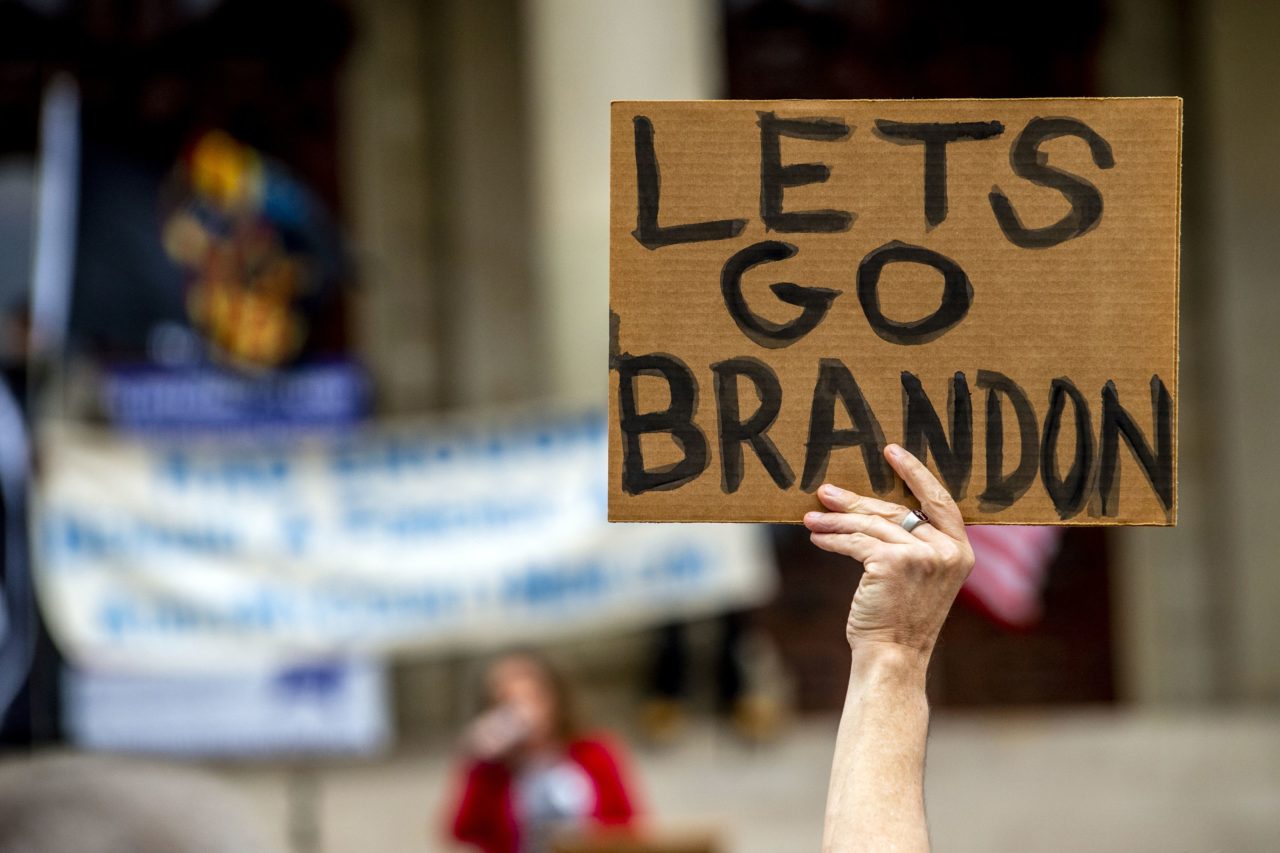 The first time I came across #LETSGOBRANDON, I was in line at a craft store picking up some stocking stuffers, and a woman in her late forties with three young children in tow was wearing it on a t-shirt. I naively assumed it was some kind of fundraiser for a local father who’d been injured or a courageous teenager fighting cancer. It was only after getting into my car and doing a Google search that I realized it wasn’t any kind of expression of collective humanity—it was a thinly-veiled middle finger to President Biden.

The hashtag was born after a sports reporter misheard a racing crowd chanting “F*ck Joe Biden” while interviewing the winning driver named Brandon Brown, thinking they were cheering him on. (Normal, decent people would have been doing that.)

#LETSGOBRANDON has since become a wink, wink rally cry of soccer parents, storeowners, airplane pilots, truck drivers, Republican politicians, and school teachers: a way of showing people that not only are they emotionally-stunted adults with misplaced anger issues—but they’re cowards as well.

Recently, a father of four named Jared Schmeck was on a live televised phone call with the President and First Lady, on a Christmas Eve event supposedly tracking Santa Claus’ progress, (a tradition designed to give children and their families joy in anticipation of the day ahead). After President Biden asked what Schmeck’s children were looking forward to and sweetly wishing him and his family a Merry Christmas, the man inexplicably punctuated his call with “Let’s Go Brandon.”

If you’re looking for someone not making America great, here he is.

I’d love to talk with Mr. Schmeck and the rest of the #LGB crowd and find out what exactly Joe Biden has done to them to inspire such expletive-laden rage. How has he specifically harmed them? What precisely are the injuries they have sustained at his hands to merit this unprecedented public disgust?
Has he denied or downplayed the existence of a pandemic and willfully killed hundreds of thousands of people?
Has he ever incited his followers to engage in an act of domestic terrorism to overthrow the government and overturn an election?
Has be berated reporters, coddled dictators, opposed medical experts, insulted women, or repeatedly misled the American people in nonsensical, rambling press conferences?

I’m fairly certain Jared Schmeck and those brandishing this infantile code language don’t really even have a reason—other than, it is yet another moronic expression of toxic tribalism done in honor of and in the image of their traitorous MAGA messiah. It is a siren’s song of people who are so uninformed and bereft of decency that the only movements they are capable of being part of are anti-movements:

They are against vaccines.
Against masks.
Against immigrants.
Against universal healthcare.
Against responsible gun legislation.
Against environmental protection.
Against women’s autonomy.
Against black lives.

It isn’t surprising that Republican voters joyously and proudly plaster a middle-finger, f*ck-off to a sitting president on their chests and bumpers and store windows. This is what this side of the aisle has become; something that is only interested in and capable of generating negativity. There are no ideas, there is no creativity, there is no empathy; nothing that seeks to build or unite or help.

I really hope I see the women from the craft store again. I want to ask her in front of her children, exactly what the words on her t-shirt mean to her and why she’s wearing them. I wonder if she’ll feel self-conscious or uncomfortable unpacking exactly what she’s participating in. I hope so.

I despise the #LETSGOBRANDON movement but it is helpful. It allows us to identify people who whose hearts are permeated with hatred and to remind ourselves why we want to be nothing like them.